Sri-Lanka: Magic and Majesty at the Esala Perahera

This guest post is written and photographed by Marie-Laure Parsy of Introspections Nomades giving us a glimpse of the beautiful and majestic island of Sri Lanka and the enthralling processions of Esala Perahera. Enjoy!

To me, a Frenchie living under the sweet drizzle of England, and soon further exiled to the northernmost coolness of Iceland, the surrounding fug feels murderous. I am hopelessly tip-toeing across busy dusty streets, the soles of my feet finally surrendering to the blasting heat.

I am on a two- week trip to the cultural hotspots of the island of Sri-Lanka, and have spent the last couple of days visiting barefoot (and unfortunately truly sockless) the remains of ancient temples and bygone kingdoms. And I had been humbled. Deeply humbled as I trekked across scorching banks of sand, each grain trying to fuse with the too-tender outer layer of my skin as the midday sun fueled the furnace. Last night, blisters had happily popped up like shiitakes on wet bark. 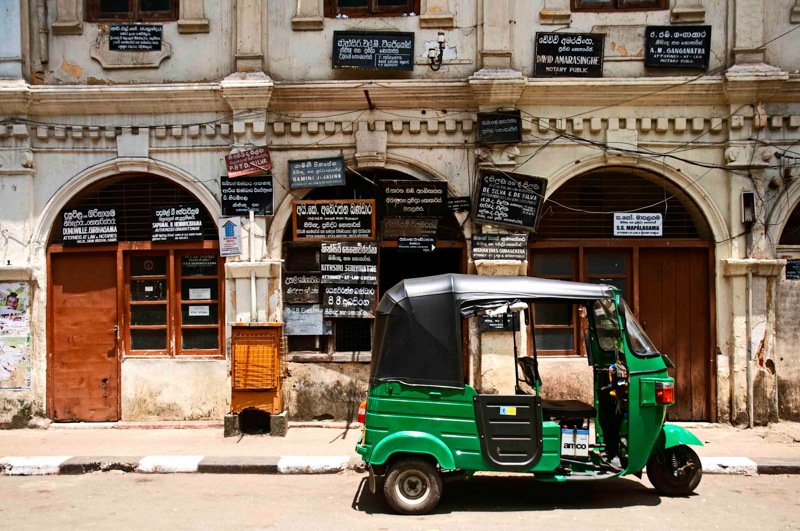 My itinerary had led to Kandy, capital of the old kings, and a major site of Buddhist pilgrimage. The city is home to the Sri Dalada Maligawa, a large temple located within the royal palace complex. There, is housed the Sacred Tooth of Lord Buddha, a religious relic that traditionally confers divine right to its owner to rule the island.

Every year in July and August, Kandy renews its centuries-old vows of veneration, and as a lavish festival descends upon its streets, fire and men suddenly fuse together in dances under the heavy footsteps of richly-adorned elephants. The Esala Perahera is the largest Buddhist gathering on the island and a true symbol of the Sri-Lankan culture. My visit coincides with the Kumbal Perahera, a magnificent cortège of fire and people that erupts as night falls.

Along the established route of the procession, the pavements are blackened with the faithful and the curious, a crawling throb that soon stratifies itself to reflect social hierarchy and financial status.

The humble cram themselves on the ground, squatting on plastic, cushioned onto each other. Youngsters, parents and elders squeeze tight between a pressing wall of the devoted and the safely closed-off path of the Holy March. On strategic corners, shopkeepers and landowners lay neat rows of wooden benches and metal chairs, hoping to attract generous budgets or to sweetly fleece the naive.

Higher, towards the heavens, balconies get ferociously negotiated. Every spot is haggled over tens of dollars. Stallholders become hawkers and pounce like famished vultures onto each tourist-shaped figure within sight and reach.

The streets smell of gas, of dust, of piss and spices, and of impatient devotion. Roofs and window stalls, concrete and brick, closed courtyards and open walls, all get assaulted by buzzing swarms, striving for urban selection.

It’s time to bear our fangs. We let prices fall into the abyss as our potential providers cockfight each other with zeal, cheerfully shouting insults as their trained noses wrongfully smell a juicy deal.

“Don’t go with him! Shut up you! It’s my shop and my clients! I make it cheaper! CHEAPER!”

The light falls, the sky darkens, the voices settle. I glance through the window opening, eyes already accustomed to the surrounding darkness before feeling my pupils crystallize and burst. The cemented gully at our feet had come to life, barking loud as its jaws opened, tongues of fire licking the pious crowds.

The first procession towers in radiant majesty as three elephants accompany with luminous pride an ancient casket that substitutes for the Sacred Tooth Relic. It travels on the back of the tallest elephant, the Maligawa Elephant, perched high above dust and gravel, unreachable by hand, barely touchable by sight, a whisper of awe gently breezing among worshippers and admirers alike.

Further down follows the processions of the four Devales (Temples) of Kandy, each one clothed in their own shade of light. The Natha Devale, said to be the oldest building in Kandy, comes first. The Vishnu Devale engulfs the watchers in a myriad of blue-coloured silks, the Katharagama Devale presents its peacock dance, and the Pattini Devale closes the march with shyer decorum. The thrum dies, the light sets, the magic slowly fades, a canon fires.

The crowds are unleashed, blackening the main streets in a split second. Where drums had enthralled, now buzz the excited honks of automobiles and Tuk-Tuks, all ready for the mighty onslaught of people.

Back on my bed, sleep escapes me. My hands are cramped from my camera, my eyes are burnt with memories of whirling torches, my ears deafened by the rhythmic bangs of drums and the distant footsteps of beasts. All fades and I seemingly trance out, enthralled, enriched and exulted.

Originally a biophysicist from the University of Oxford, my sheer passion for exploration took me wandering from the fjords of Greenland to the high mountains of the Himalayas, hiking across the Sahara dunes and the mountainous expanse of Central Asia. I am a recent winner of Wanderlust magazine’s ‘From the road’ literary competition and a runner-up of the Telegraph Outdoor Adventure & Travel Show “Capture the Moment” photo contest. Always seeking to push my own limits, I am currently preparing a five-month long expedition across the Nepal Himalayas for peerless high-altitude adventure!