It was a calm day on the river when, suddenly and with virtually no warning, the crocodile burst out of the muddy water and snapped voraciously at its prey barely five feet from my nose.

Nicknamed Hannibal, the croc was over 15 feet long and a predator from nose to tail. Hannibal was our spectacular introduction to a jumping crocodile cruise on the Adelaide River just outside of Darwin in the Northern Territory of Australia. Plan your visit to Darwin’s best things to do and go check out the jumping crocodiles. They are an amazing sight to see. 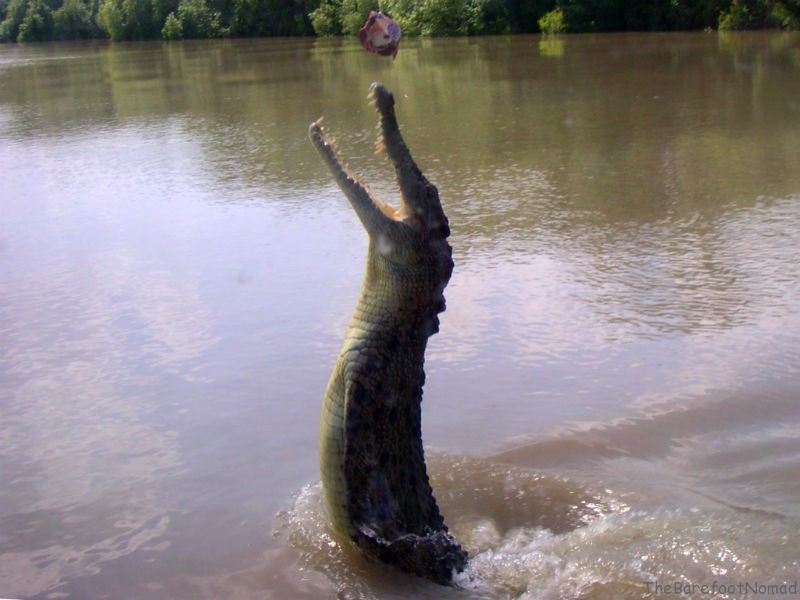 Jumping crocodile on the Adelaide River

Within moments of his previous lunge, our petite female guide casually dangled more meat from a long pole into the river to lure Hannibal to jump again. Using quick tail movements, Hannibal slowly powered himself up out of the water, grabbed the bloody treat from its fragile string, and slowly sank back into the muddy river.

In the background, the boat captain gave a commentary in a surreal and cheery voice that reminded me a bit of Mr. Rogers. He explained that Hannibal was an estuarine croc, commonly called a salty. He calmly noted that saltwater crocodiles have occasionally taken an unfortunate person off the banks of the river and can reach up to 20 feet in length.

Right about then, I was more than happy to be on a huge boat, with a couple of tons of steel between the crocs and myself.

Cool and calm behind her dark sunglasses, our guide showed no signs of fear as Hannibal repeatedly lunged out of the river. Curious, we asked if she’d ever come close to being pulled into the water. Smiling, she said that she’d once panicked and held on to the pole as a croc tried to pull both the meat and her into the river. Luckily, an American bodybuilder on the cruise grabbed onto her T-shirt just before she was pulled over the railing.

As the boat glided down the river, our captain announced, in his chipper Mr. Rogers voice, that he’d spotted another croc to the right. Straining, I could barely make out what seemed to be a log floating on the edge of the riverbank. Eventually, the log began to move smoothly toward the boat. As it came closer, I could see the croc’s clear yellow eyes focused sharply on the dangling meat. Nearly 20 feet away, it disappeared below the brown water. Suddenly, the croc reappeared about five feet from the boat and lunged at the tempting treat. Just as fast as it attacked, it disappeared under the surface with barely a ripple. 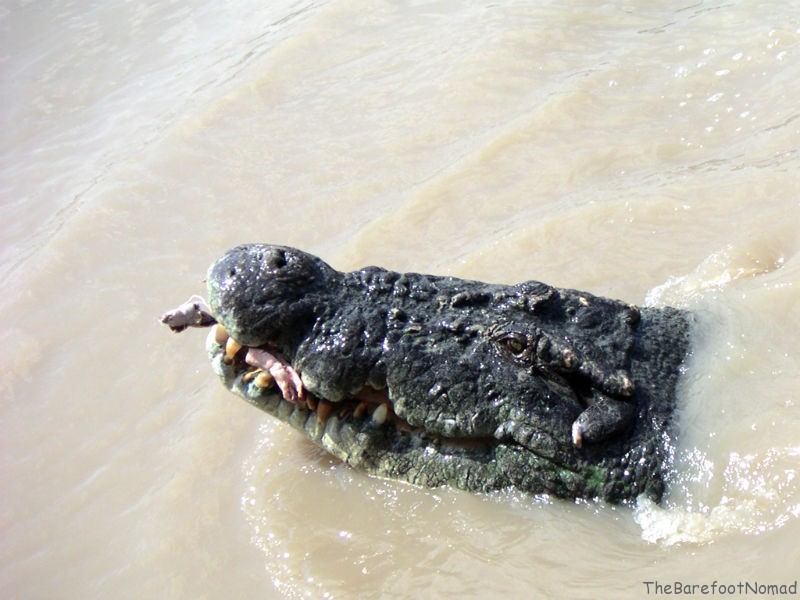 By the end of the day, we were lucky enough to spot almost a dozen salties, ranging in size from barely three feet long to the huge Hannibal. Each time, the guide chatted calmly with us as the beasts snatched the meat dangling only a few feet from her sandals. With observation spots both on the lower level near the water and from above on the open canopied deck we always had great views of the saltwater crocodiles.

As both the afternoon and the cruise ended, we waved goodbye to our fearless guide and drove toward Kakadu National Park. Reminders of our time with one of natures greatest predators followed us throughout the day as we saw signs warning against swimming in the local creeks and watering holes all along the highway. 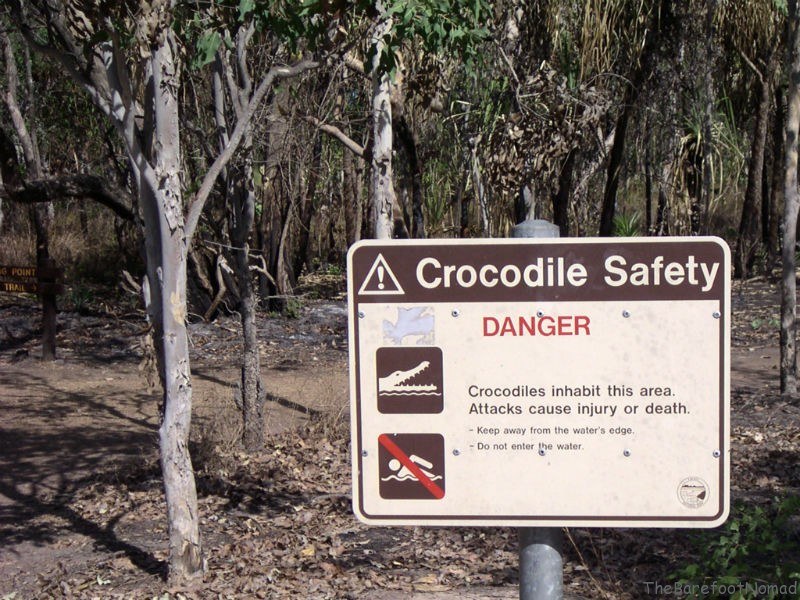 As we drove past the many creeks, I couldn’t shake the image of Hannibal hurtling himself out of the Adelaide River. After our amazing jumping croc cruise, the only swimming I planned in the near future was in the safety of a nice, clear swimming pool!

Where: The Adelaide River crocodile cruises are 65 km from Darwin, Australia, on the Arnhem Highway on the way to Kakadu National Park. Turn left onto Window on the Wetlands.

Tour Operator and Cost: We booked this tour with the Spectacular Jumping Crocodile Cruise, still in operation. Cruises are $35/adult and $20/child. Check out reviews on TripAdvisor.

This post is part of our flashback series, taken from emails and letters written to our friends and family from our year long trip to Asia and Australia in 2003.