Drowning in History in Belem, Portugal

The four of us stand huddled together on the banks of Portugal’s famous Tagus River, bracing ourselves against the cold and looking out over the choppy water.

It’s from this very spot on the shores of Belem that Vasco de Gama set out on July 8, 1497 and discovered a direct ocean route from Portugal to India and opened up the famed Indian Spice Route.

By historical accounts, the shores of the Tagus were filled with tear-soaked well wishers that day. The king himself, Manuel I of Portugal, came to see them off, accompanied by a procession of priests and friars, mothers, sisters, brothers and friends of De Gama and of his crew. By some accounts, almost all of Lisbon was on the shore to bid farewell to the three small ships.

We think of ourselves as travelers, but our trips are nothing compared to the hardships and adventures of those who stood on this same spot 500 years ago. The distance traveled by de Gama in those small ships was equal to circumnavigating the globe, and the voyage took well over two years (they arrived back in Lisbon on August 29, 1499).

Once a small village at the entrance to the Tagus River, Belem  grew into an important trading station and even became the home to royalty and the rich. In the early 1800s, the area grew into an industrial zone thanks in part to its proximity to Lisbon and its easy water access.

After a few days in Lisbon’s bustling Bairro Alto district as part of our road trip through Portugal, we took a break from the hustle to visit the Belém Tower. At the behest of the king, the Torre de Belém was constructed to help protect the city of Lisbon and to guard the entrance of the Tagus river in 1514. It was completed in 1519 and has had a prolific life ever since. Its basement dungeons were even used as a prison for many years and the fort’s exterior has been refitted twice since its original construction.

Sitting by ourselves along the banks of the Tagus, it’s an imposing site. Unlike the majority of Lisbon’s ancient buildings, the Belem Tower survived the major 1755 Lisbon earthquakes that devastated the region fully intact. That earthquake was so severe that it actually shifted the Tagus river and the fort is now practically on the shoreline when it was originally built on an island slightly further in the river.

Maybe it was the cool weather, but the Tower was nearly deserted the day we saw it. The gate was also closed so we didn’t get a chance to see what it looked like on the inside, but we had heard that the exterior was its most impressive feature anyway.

As we walked around the backside of the fortress, the tide was low and we could see the ancient waterlines that surrounded the tower. It was an imposing site and gave the solitary tower not only an ancient air but also one of sadness.

Luckily the sadness was fleeting and the kids quickly cheered the place up when they jumped on the little beach and made a few impromptu sand castles in honor of the Tower. I’m sure it was thankful for the homage, but I think it started to brood again as we walked away.

Leaving the lonely tower behind, we drove past the giant Padrão dos Descobrimentos (Monument of Discoveries) celebrating Portugals famous Age of Discoveries. At the prow of the statue stands Henry the Navigator followed by 32 famous Portuguese figures from kings to cartographers who helped pave the way for worldwide exploration. It was drizzling so instead of getting out and checking it out up close we decided to stop for a bite to eat.

Seeing that we were in Belem, we had to stop by the famous Casa Pasteis de Belem for some pastel de nata. This shop has been an institution in Belem since 1837 and was worth every penny for its delicious pastry. We enjoyed it so much you can read our post about it here.

As we reluctantly left Casa Pasteis de Belém behind, the sun was finally peaking out so we decided to take a walk through the large parks across the street.

Right by the casa is the Praça do Império (Imperial Square) and next to it is Afonso de Albuquerque Square (Praça Afonso de Albuquerque). This square also happens to be right in front of the Belém National Palace, the official residence of past kings and now the home to the president of Portugal. The National Palace seemed quaint in comparison to some of the areas oversized structures, but in our eyes that can be forgiven since they’re practically next door to Pasteis de Belém. 😉

After walking the grounds for a bit we wandered towards the Jerónimos Monastery. The monastery, also known as the Hieronymites Monastery for the religious order that first built it in the 15th century is a gorgeous Manueline building with crazily ornate limestone architecture with a definite maritime theme throughout the building and the grounds. This is probably why the Marine Museum is located in the monastery’s annexes.

We decided to skip  visiting the Marine Museum, but ended up walking around the monastery and the grounds for a lot longer than we expected. The amount of detail in every crevice is astounding and it almost feels like you’re walking through an expansive piece of art rather than through a church.

There’s history in every corner of the Jerónimos Monastery and it was where we found the final resting place of famed explorer Vasco De Gama.

I still remember learning about his famed 1498 voyage around the Good Cape in my history class many years ago. He is credited with opening the European spice route to India while heralding a century of exploration and Portuguese colonization. Seeing his tomb next to Portugal’s past royalty and right across from Portugal’s famed poet Luís Vaz de Camões actually gave me goosebumps.

After completing our tour of the Jerónimos Monastery, we decided to call our day a success and headed back to our place in Bairro Alto in central Lisbon for a relaxing evening meal.

Of course, it took Micki and a few impatient drivers to stop me from making a quick pit stop on the way and sneaking a few extra pastel de nata home with us. If Vasco de Gama had been born a few centuries later after Casa Pasteis de Belém opened its doors, I’m sure he would have taken a few extra on his trip as well. 🙂

Check out the free (and a bit scholarly) book The Three Voyages of Vasco Da Gama, and His Viceroyalty by Gaspar Corrêa or these New York Times Notable Books by Nigel Cliff. 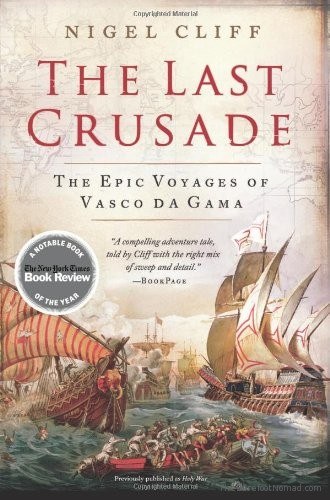 The Last Crusade: The Epic Voyages of Vasco da Gama 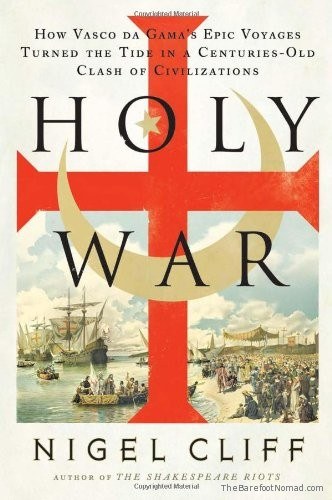