For the Love of Squares, a Walk Around Centro, Madrid

One of the first things you’ll notice as you walk around historic Madrid is a particular habit that people have of randomly grouping together in squares around the city. This is definitely not unique to Madrid or even Spain. It happens right across Europe and it can even be found in some countries so far removed from bustling civilization that you begin to wonder if the need to congregate in open areas is recessed deep within our genes. 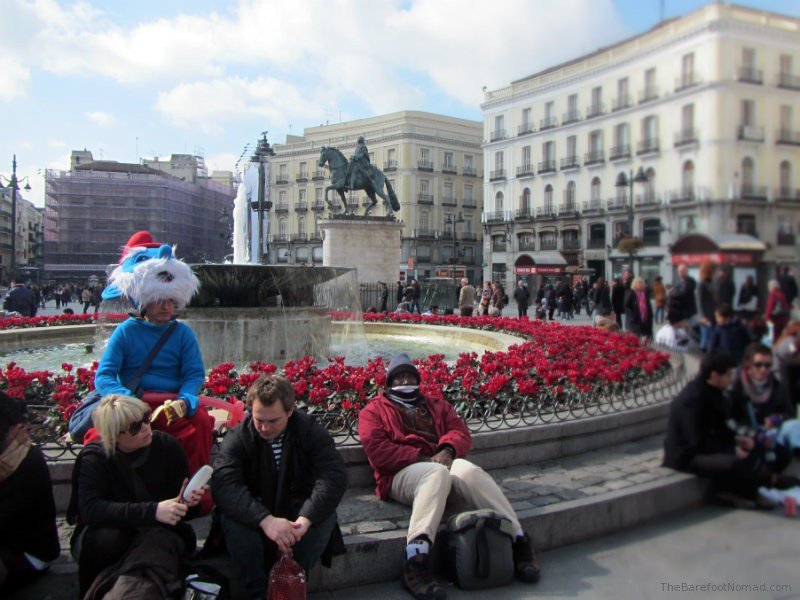 Even Smurfs need a rest…

What I do know, however, is that no people seems to cherish their public squares quite as much as the Madrilenos. With dozens of these plazas scattered throughout the city, it never takes long to find one. To be honest, even the streets of Madrid and the miles of pedestrian only walkways seem to be busy at all hours of the day and night. Mornings are the calmest times in the city only because the all night party goers have finally called it quits and are grabbing a much-needed rest before they get up and do it again.

The squares of Madrid definitely hold a special place in the hearts of the people. Plazas are not only some of the top tourist locations in the city, but they are also the areas locals use to meet, greet, people watch, voice their opinions, eat, drink and be social. Plazas are definitely the main vocal point of a proud nation and anytime the city sees unrest you can be assured that it all started in one of the main squares. 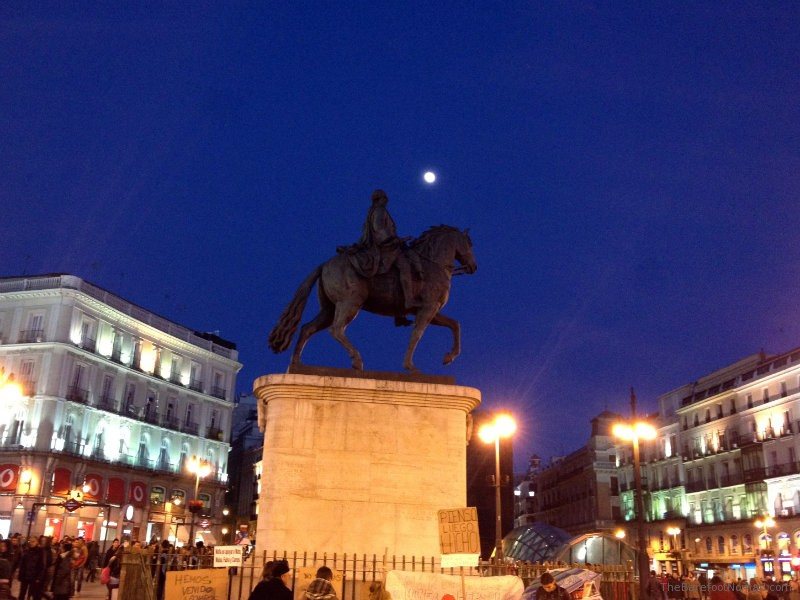 We definitely noticed a heightened police presence in most of the major squares and, considering the unrest of the people in response to Spain’s recent economic troubles, you can be sure that more mass gatherings are on the horizon. We actually heard there were mass protests while we were in the city, but we didn’t even realize it until we had already left the city on our Portugal adventure.

Regardless of the problems, Madrid’s main squares are some of the nicest areas of the city and are generally much cleaner than you would expect considering the amount of people the plazas witness on a typical day. Whether surrounded by ancient historical buildings, budding trails and parks, or by some of the grandest buildings of the city, you can always be guaranteed of two things. One is that a statue of a significant historical figure will be near the center and the other is that there will be a large group of people. Most of the time, a square will also include a few restaurants or bars with outside tables and some local entertainers, including someone dressed up in a costume hoping for your loose change when your kids take a liking to them. 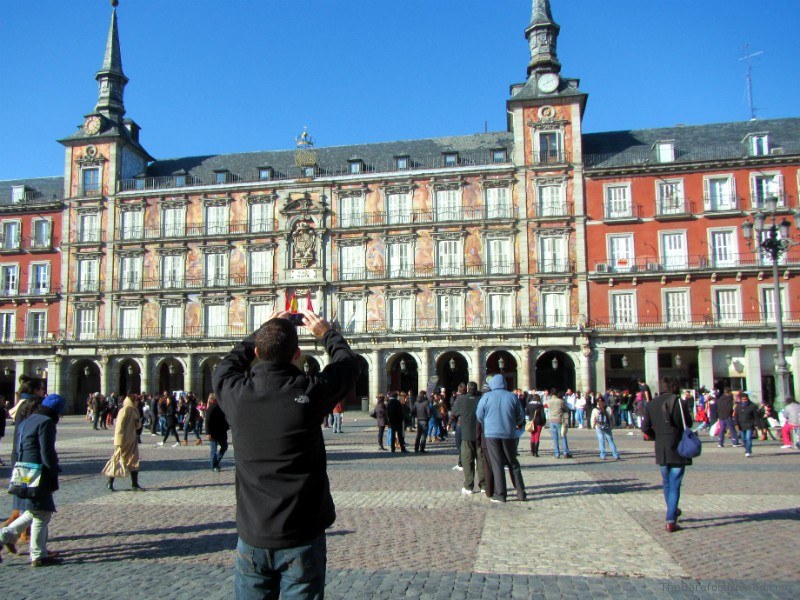 We got so caught up in the spirit that more than once we found ourselves still standing around a square long after we had seen everything the plaza had to offer. There’s something about the squares in Madrid that make it seem right for you to stand around, talk to a few passersby’s, watch an impromptu magic act, eat some pastries from the corner shop and generally partake in the shared experience of being in a shared space with others that are there for their own reasons. It is a way of connecting to others without actually having to go out of your way to do it. 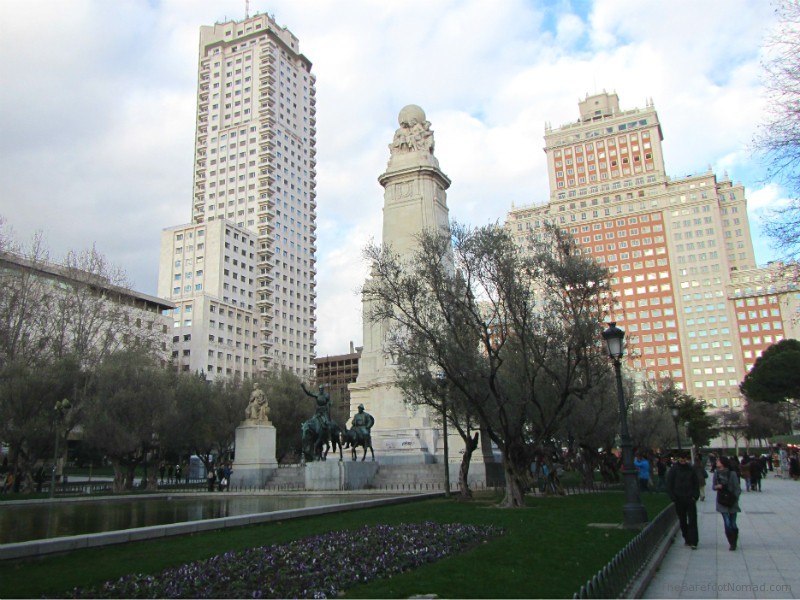 We definitely enjoyed visiting the different plazas on our daily walks around the city. Staying right next to Puerta del Sol and only a few streets over in different directions from Plaza Mayor, Plaza Oriente and Plaza de Espana, even the kids seemed to enjoy them and we had to pull them away on several occasions as the shared exuberance and excitement of the people infected them. It also never hurt that even though there were always people in the squares there was always room for them to run and play. After spending almost a week in the city center, they loved the opportunity to stretch their little legs. 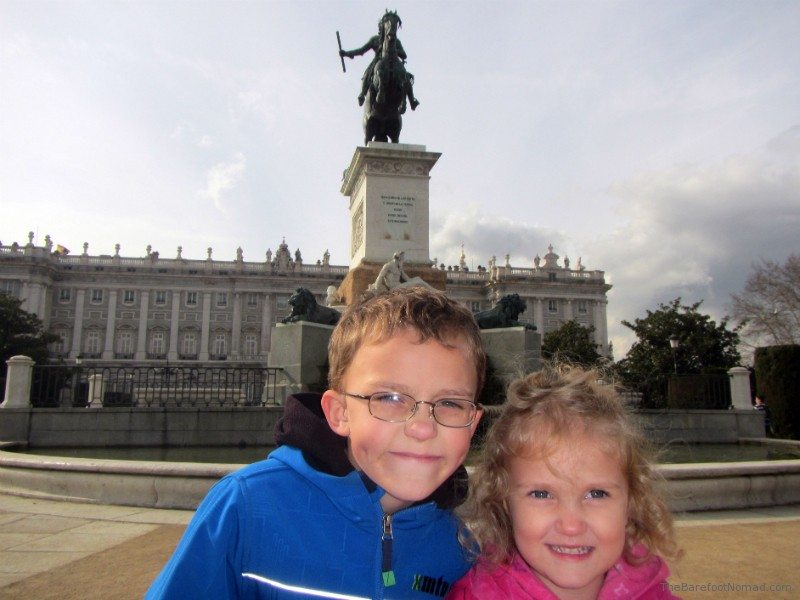 For sure one of our greatest memories of Madrid will be its many plazas and squares. One of our favorites was the Plaza Oriente with its gorgeous Palace background, beautiful gardens, children’s playground and wide open spaces.

Do you have a favorite plaza or square that you loved hanging around on your travels? Lets us know in the comments.