Walking The Cliffs At The End Of The World in Sagres, Portugal

I’m standing at the edge of the world.

From this high vantage point, the endless ocean looks dark and deadly. It seems to go on forever. I imagine a primitive group of explorers reaching this rocky point and looking out with wonder as they believe they have finally found the fabled end of the world. It’s easy to see why.

With a 200 foot drop only inches from my toes, a near gale force wind quickly wakes me from my reveries and reminds me of where I’m standing. 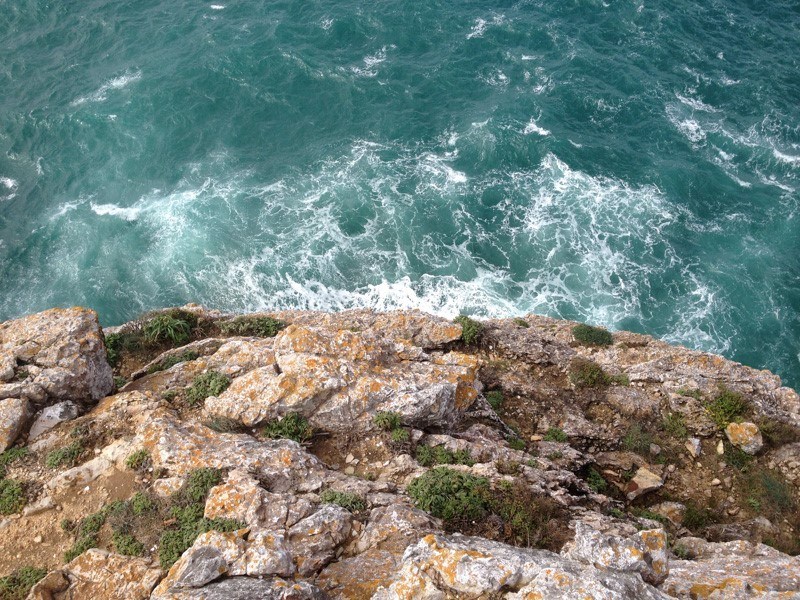 A long, long way down

Just as suddenly, the sun breaks through the clouds, the wind slows down and my son and I look with delight at a little sailboat gliding along the waves. We watch as the tail of a passing whale breaks the rolling surface in the distance and a small pod of dolphins race onward. 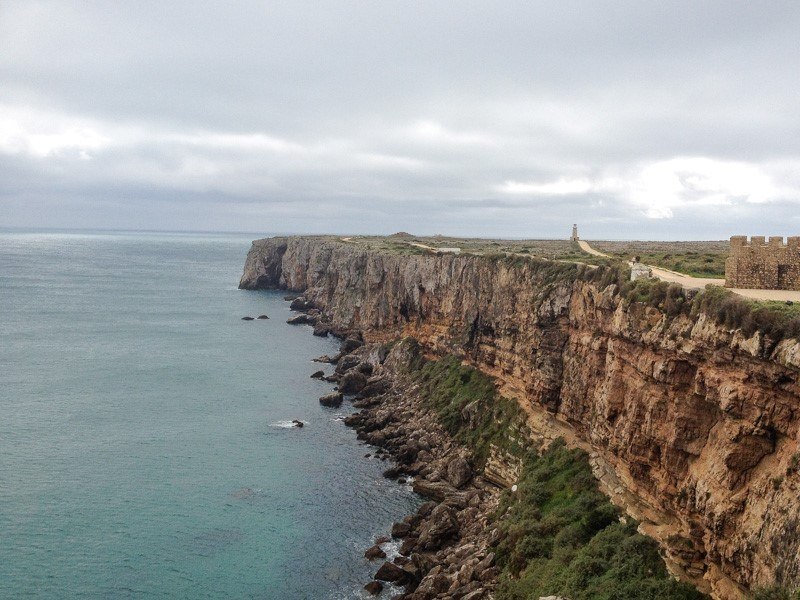 The cliffs at Sagres Point

Nearby, a group of fearless fishermen drop a very, very long net down the side of the cliff to pull up that evenings supper. Their precarious positions scattered along the tall ragged cliffs would make a mountain goat blanch yet here they return, day after day. I stand in awe of their tenacity, while Cole is just happy searching for the huge snails that line the pathways. 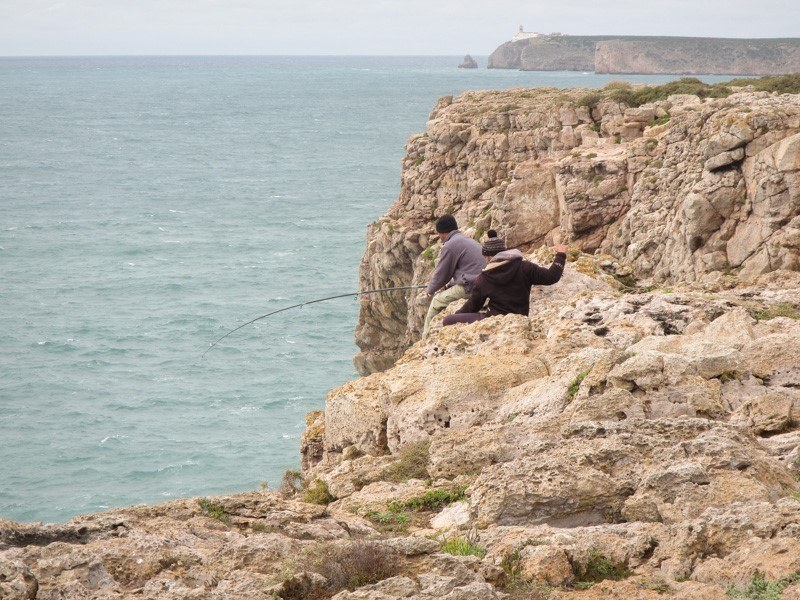 Fishermen bringing in their meal 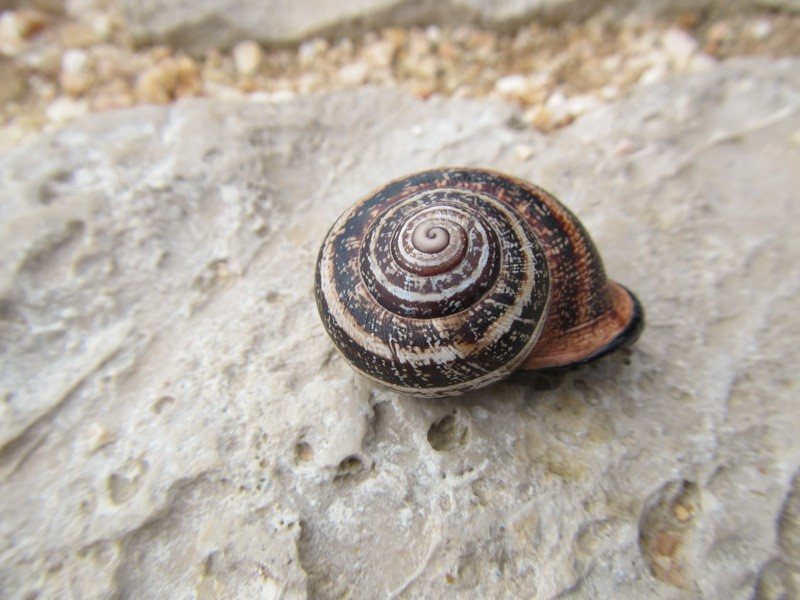 A snail on the path at Sagres Point

If you haven’t guessed where we are, we’re in famed Sagres. This area of the beautiful Algarve region in southern Portugal has a special past, however we fell in love with the place for our own reasons. After over a month of near constant travel, it was the first place we really settled in and relaxed since we had arrived in Europe. Not only was Sagres quiet and nearly empty of tourists, it was also a cheap and comfortable place to stay.

Since flying into Madrid the previous month, we’d rented a place near the center of every major town. Madrid, Avila, Salamanca, Porto and Lisbon were all beautiful cities, but being close to the center meant we had to give up precious living space.

For half the cost of a tiny apartment in Madrid or Lisbon we had a brand new, generously sized three bedroom condo with two full bathrooms all to ourselves and the place we were staying at was nearly deserted. After weeks in cramped places, it was awesome just to stretch out and let everyone relax.

That morning, feeling more refreshed than usual, we had decided to check out the sights in Sagres. A few miles out of town we found Sagres Point. Here, Henry The Navigator, a famed figure during the Age of Discoveries, walked these same cliffs in the 15th century and built a church and his home. Famed explorers were said to have trained in Sagres before setting off discovering new worlds. Even Christopher Columbus is said to have spent time in Sagres after a ship he was on sunk off Sagres cliffs.

Today, the Sagres Point promontory is an open museum including a large squat fortress built in the 1600s. 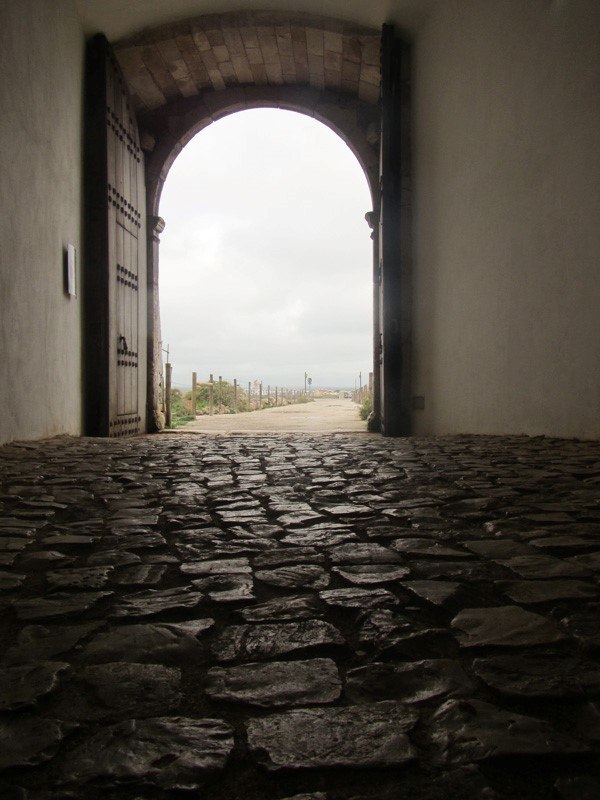 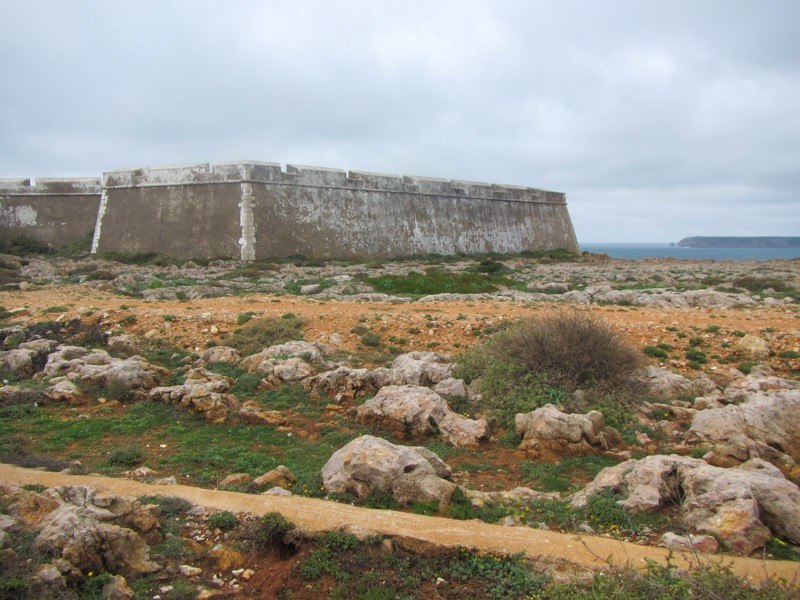 The fort at Sagres Point 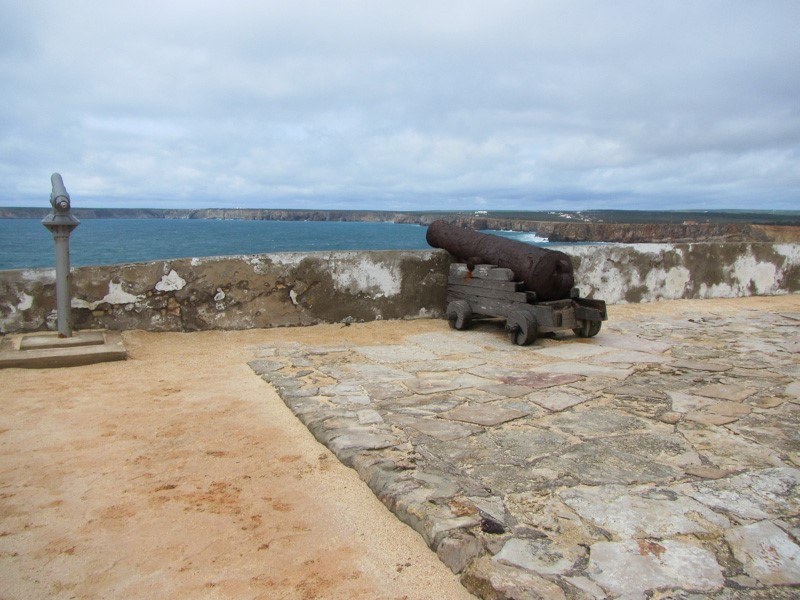 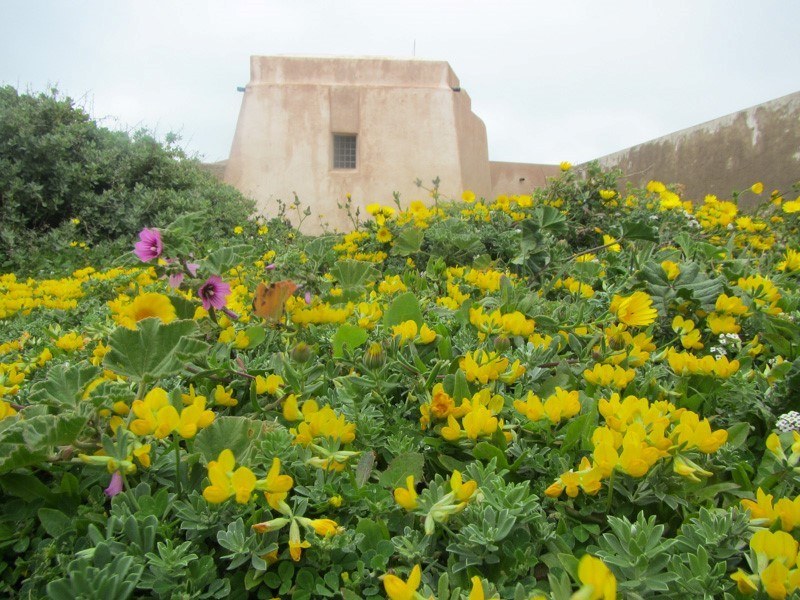 Flowers near the battlements

A lovely little semi-restored chapel from that same time period and a large 43 metre in diameter compass rose sit across from each other. Once past the squat barracks, there’s a long circular walkway that will let you see the fisherman and the famous cliffs up close. The views on the little peninsula overlooking both the Mediterranean Sea and the Atlantic Ocean are breathtaking. 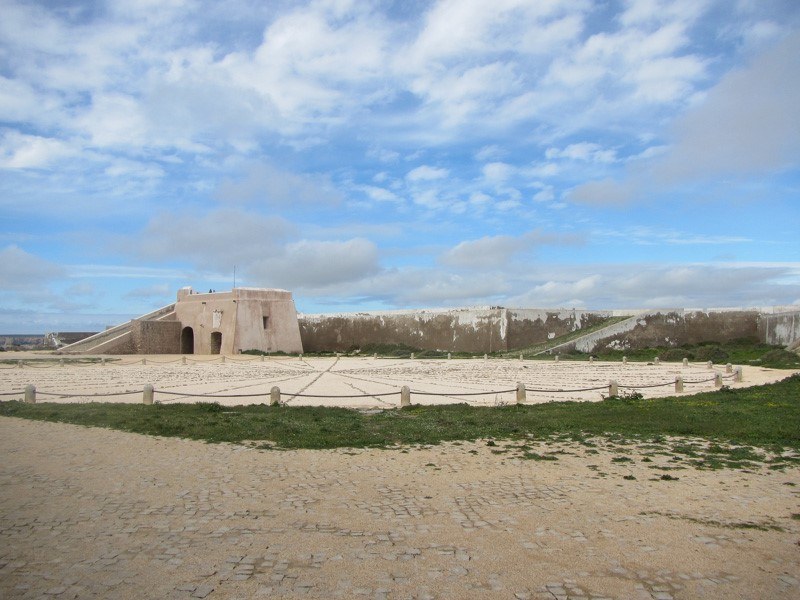 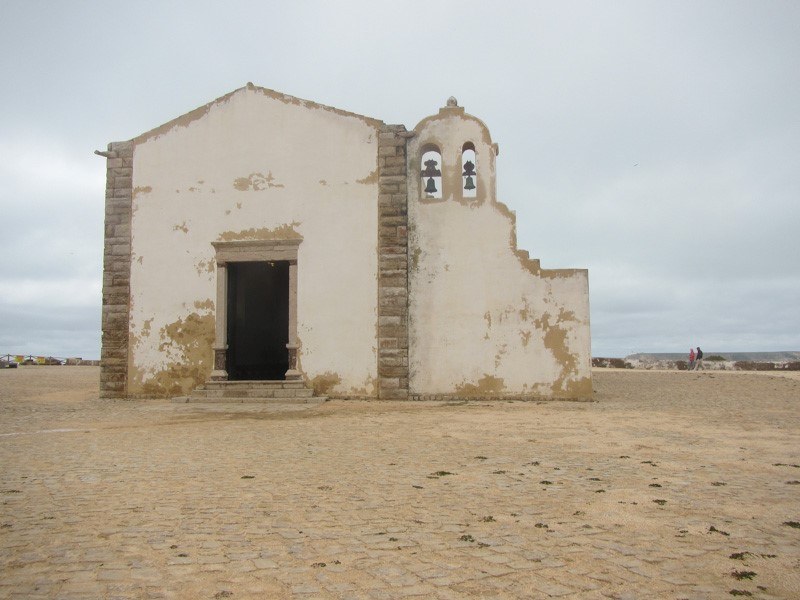 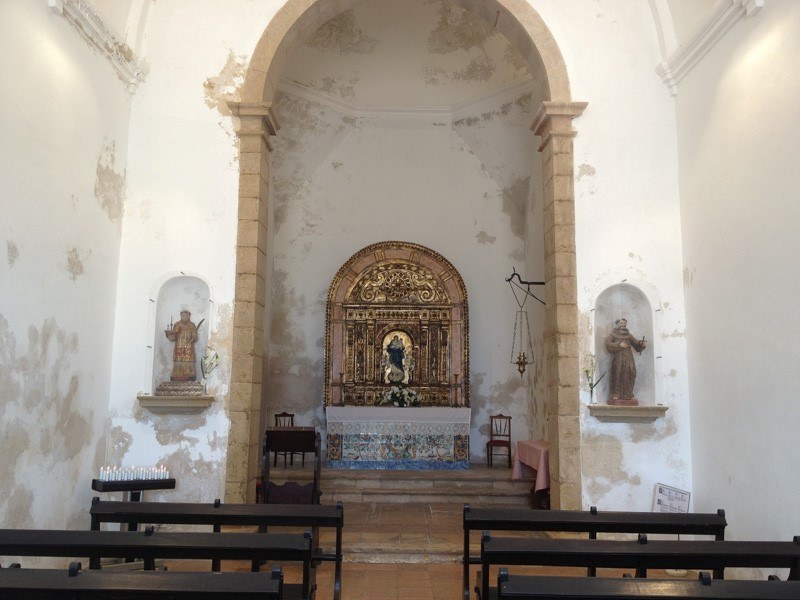 Inside the chapel at Sagres Point

It was a long walk and quite a cool and windy day when were there, so Micki and Jordan decided to seek the warmth in the little onsite cafeteria while Cole and I enjoyed the peninsulas sights and explored the cliffs. 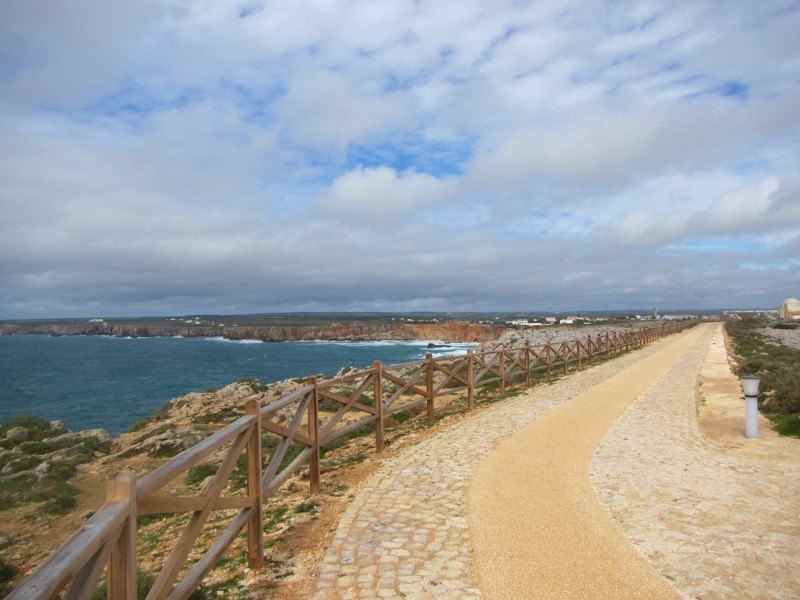 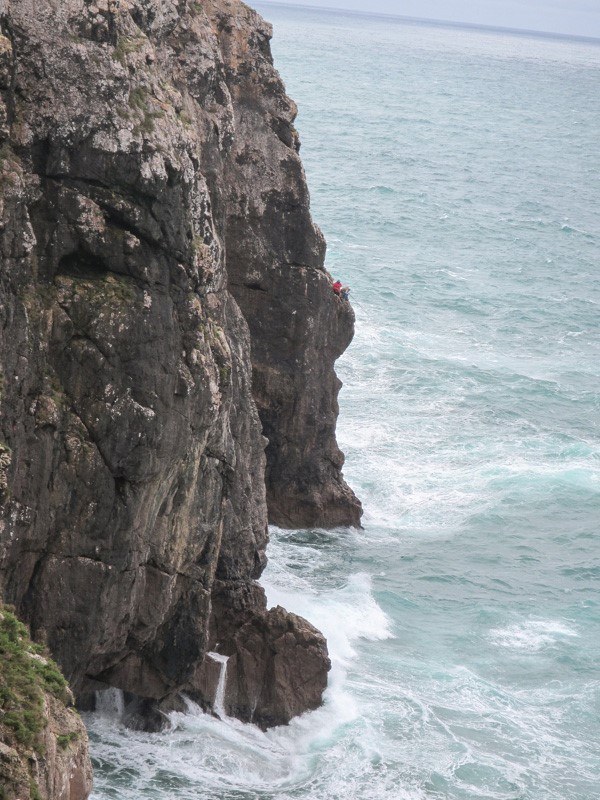 Fishermen on the cliffside. How on earth did they get down there? 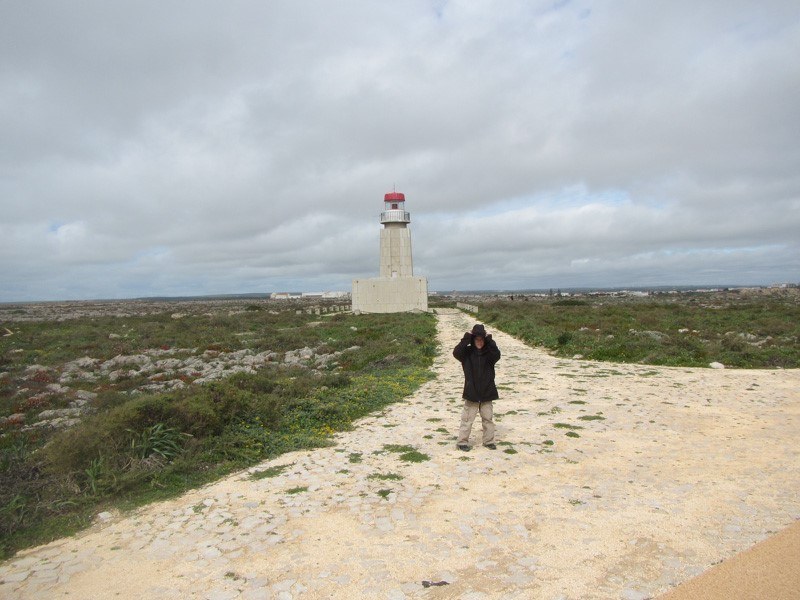 It sure is windy at Sagres Point

Only a few kilometers away lies Cape St. Vincent, our next destination. It’s the most south-westernmost point in all of continental Europe and is another great place to check out the views. With one of the most powerful lighthouses in Europe lighting up the waters where ocean meets sea, it sits on an imposing rock of land. 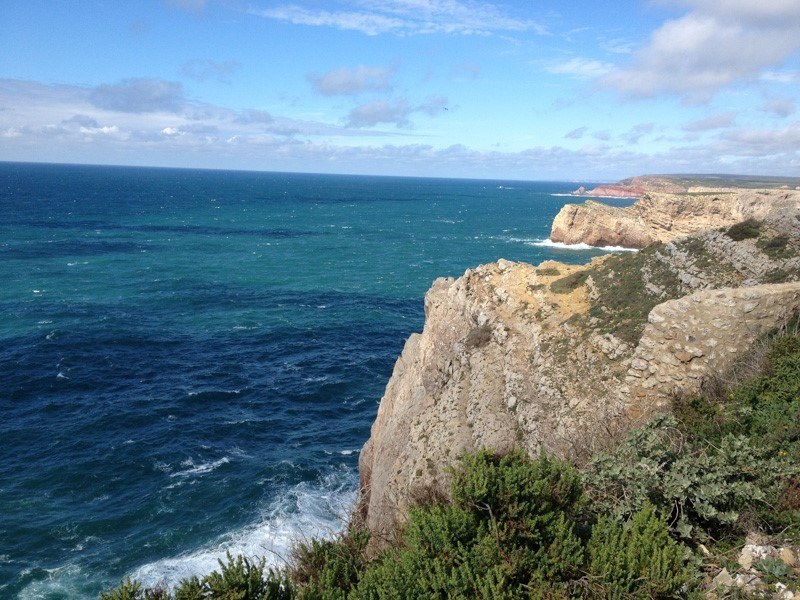 Inside the gates, there’s a little museum and snack bar, however to our chagrin we weren’t allowed to see the lighthouse up close as we hoped. The kids did find an oversized seat that they quickly claimed for themselves as Micki and I checked out the views. There’s also a great viewing area as you walk up to the gate before getting in to watch more fisherman brave the heights and sit precariously as they wait for their next bite. 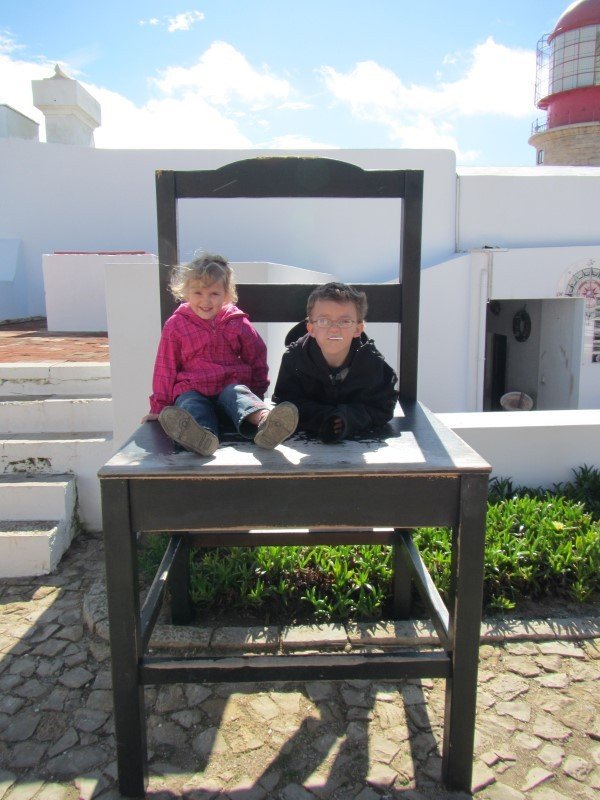 On the giant chair at Cape St. Vincent 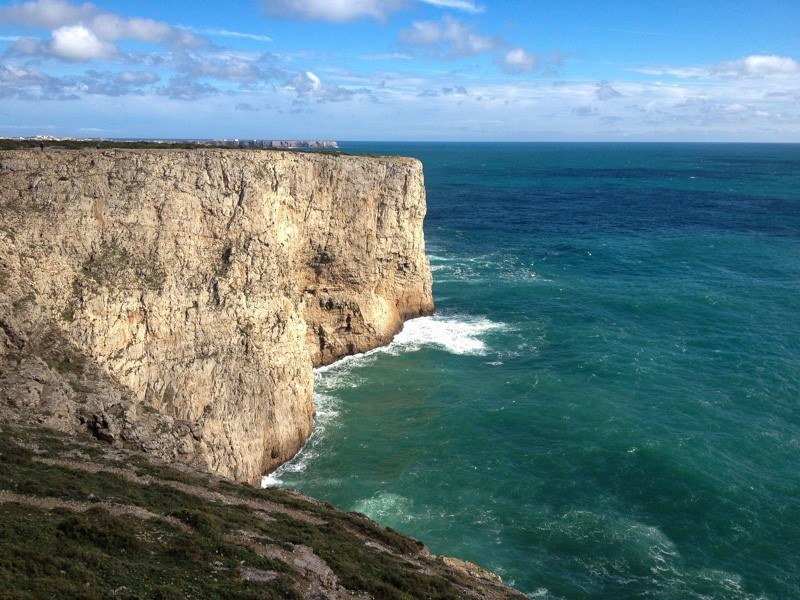 As we left Cape St. Vincent, we stopped at the nearby deserted ruins of Fortaleza de Belixe. We couldn’t find any information about the place and we weren’t even sure the land wasn’t private, however we still got out and looked around. 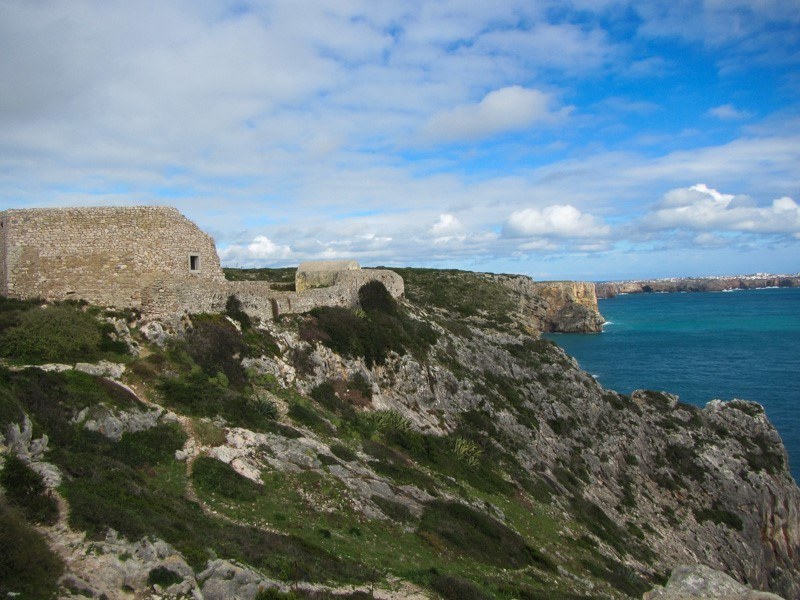 The fort had a gorgeous view and a twisting, steep path leading right down to the water from the battlements. By the time we got to the bottom there were already three other groups following us down so we knew it was probably okay to be there. We found out afterward that the place was supposedly closed due to safety concerns (the cliff is eroding away), but judging from the amount of people arriving there as we left, most tourists were disregarding the warnings. 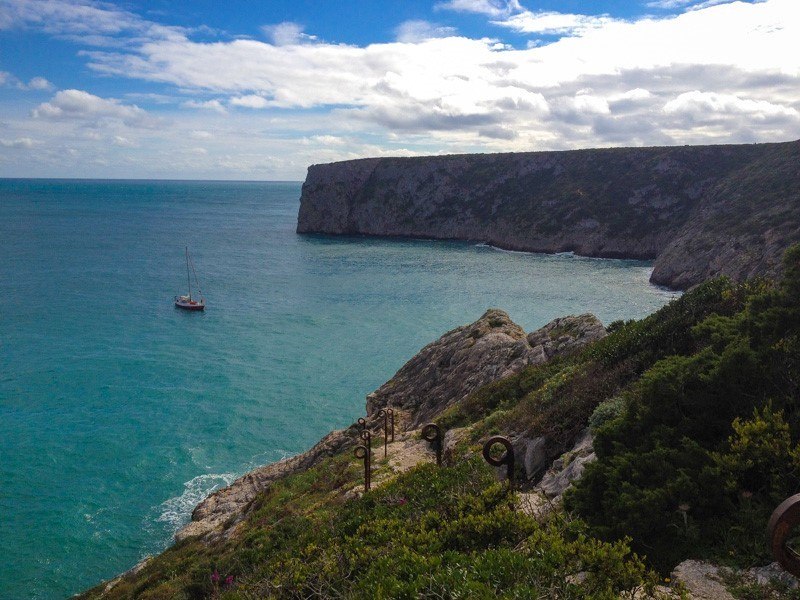 Pathway down at Fortaleza de Belixe 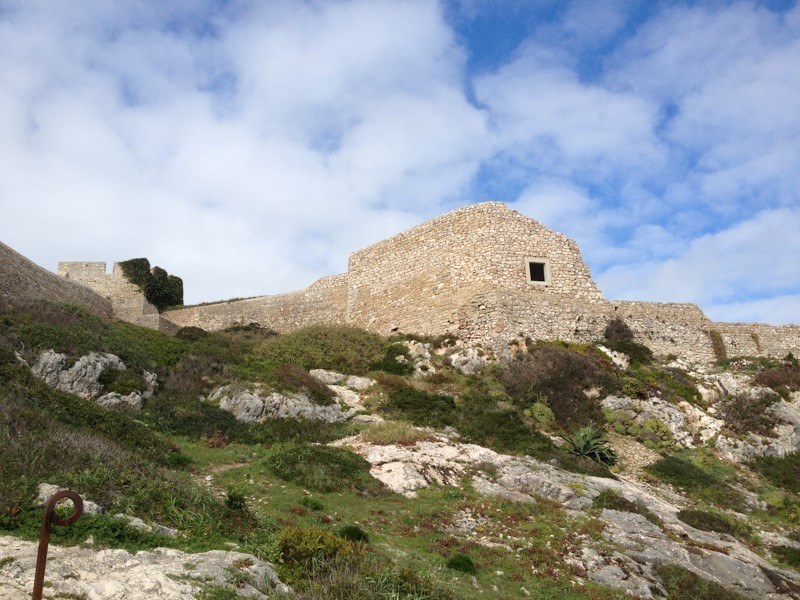 Another interesting thing about the Sagres region is that it’s been populated since the Neolithic age. We had heard there were a few menhirs scattered around the nearby village of Vila do Bispo so we set off trying to find one. As a big fan of Asterix and Obelix comics growing up (they were the only comics in our school’s French library), it was a treat to finally see one of these huge sculpted standing stones in person. 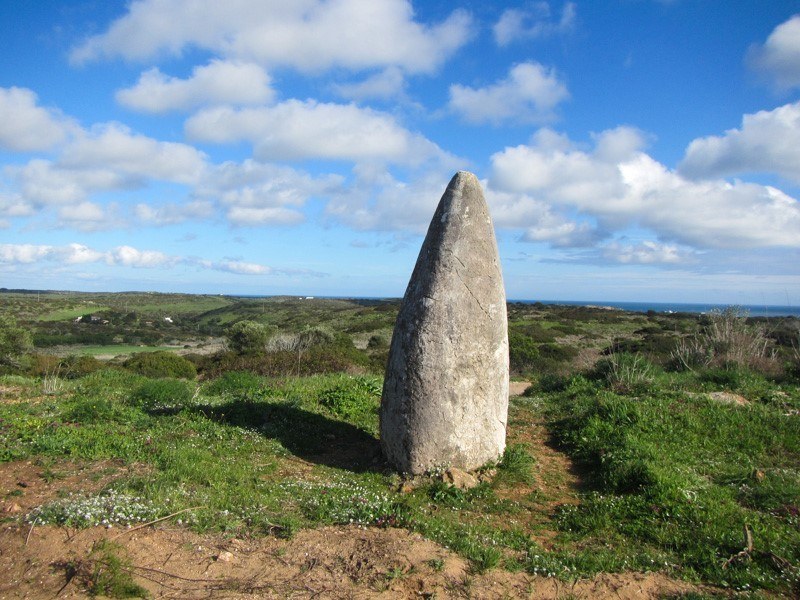 There’s a menhir stone right in town, however to see a nice one it’s best to stop at the tourist booth in Bispo to get local directions. The only one we found that was still standing is a few kilometres outside of town on a lonely back stretch of road heading towards Sagres. Just when you think it can’t possibly be there, round the bend and drive another kilometer. It’s on the right. 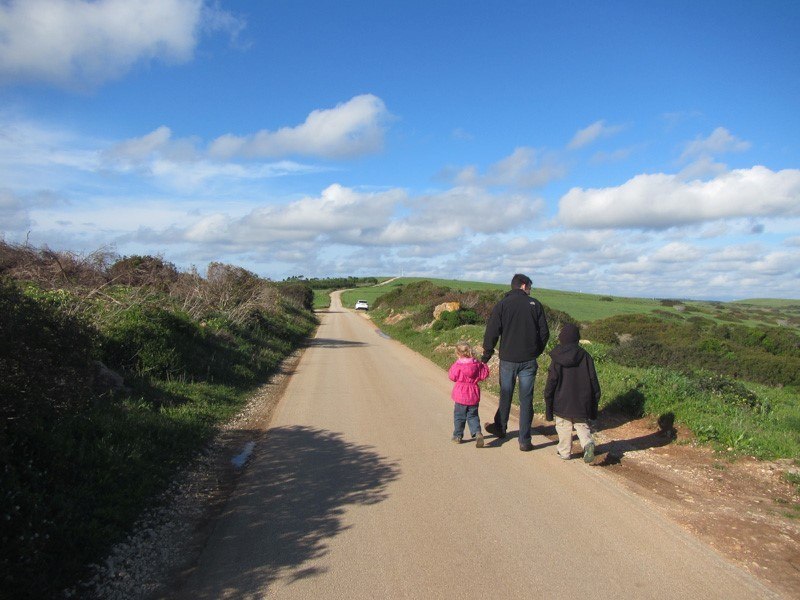 On the hunt for a menhir 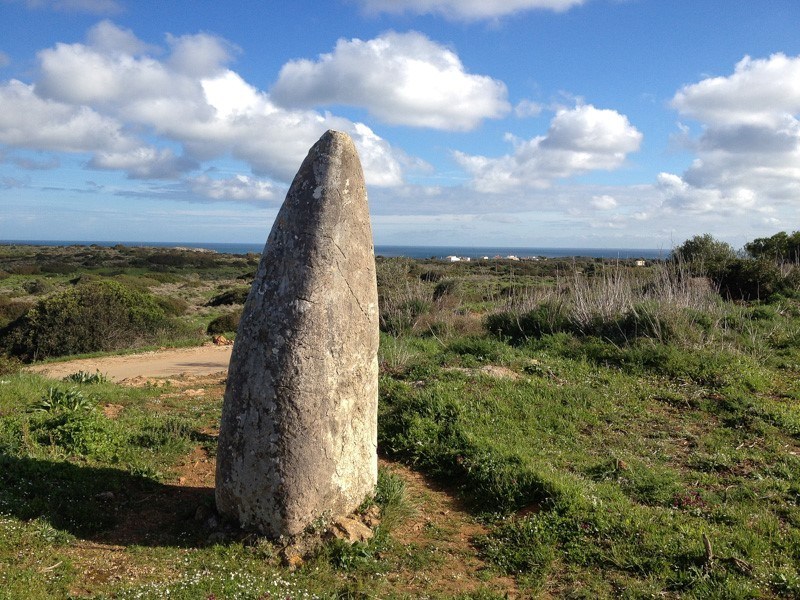 Different view of the standing menhir near Sagres 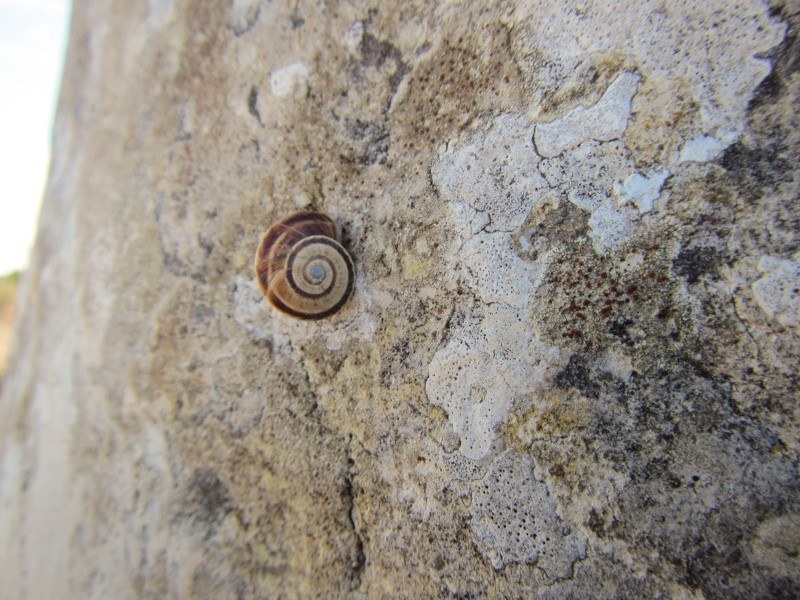 Snail on menhir near Sagres

To cap off the day, we decided to visit the marina in Sagres town proper. We were told you can see the fresh fish being unloaded in classic Portuguese fashion, however they weren’t unloading when we got there. Instead, we decided to take a long walk along the boardwalk along the beach before heading to one of the local restaurants for supper.

To say that Sagres’ quiet, deserted, windy, end of the world stay left an impression on us would be an understatement. With so many popular and busy beaches in the Algarve crammed with tourists during the summer we were glad to be able to have the place to ourselves. Based on the number of surf schools, windsurfer rental shops and kiteboarding outfits in town I’m glad we got to see Sagres during the off season.

If you ever get the chance, I definitely recommend checking out Sagres for yourself. Its cliffs may no longer mark the end of the known world,but when you’re stranding there it’s easy to believe they still do. 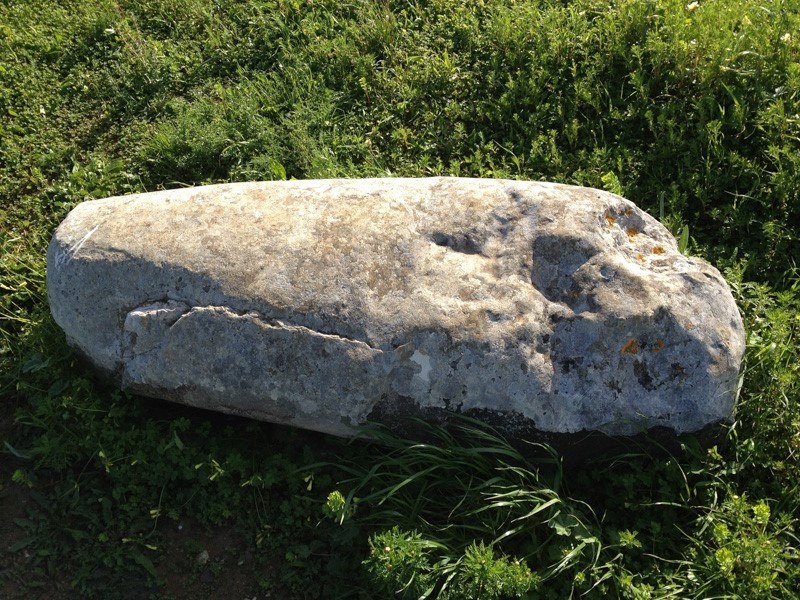