Now that we’ve been in Spain and Portugal for a month and a half, we’ve had a chance to putter around several different cities and towns, and get a feel for life here.

It’s the small details of life in a new place that really fascinate me. I love to find out how the locals live. Where they shop, what they eat, how they get around…

What have we found in Spain?

It’s laid back. Spain very much lives up to the stereotype that life here is slower, and people are much more relaxed about time.

Happily, this leaves a lot of time for leisurely enjoying gelato in the outdoor plazas and coffees at small cafes. In our month in Spain, I have only seen one person walking around with a to go coffee cup. And that was someone leaving the snack bar beside a gas station. 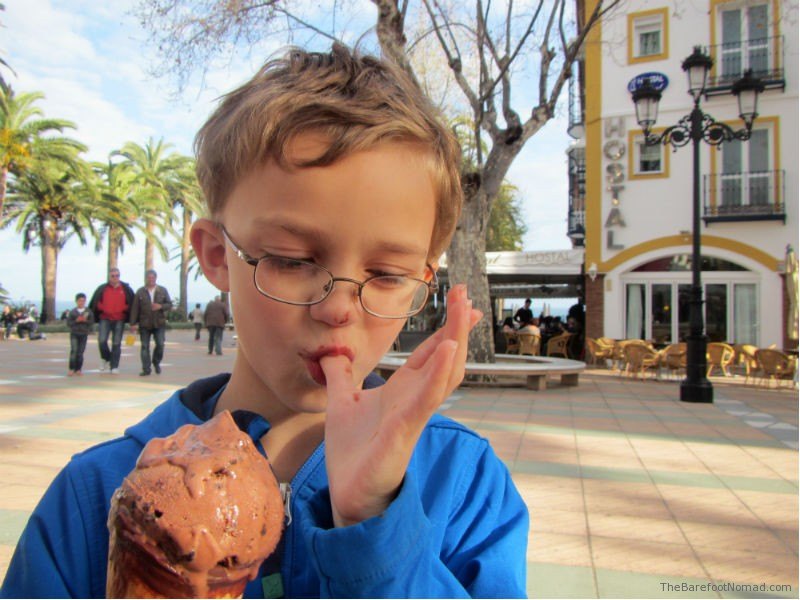 Enjoying a leisurely gelato at the Balcon de Europa in Nerja, Spain

Ah, speaking of coffee… mmmm. I’m a bit of a coffee snob. In fact, the phrase drip coffee maker makes me simultaneously angry and twitch involuntarily (I’m sure Charles is rolling his eyes about now). While Italy is famous for its espresso, I’d have to say that Spain’s simple cups of coffee are a solidly respectable brew. In fact, it took almost a month, and coffees at probably over 20 cafes, before I finally tasted my first bad cup of coffee.

Moka pot espresso makers. Luckily, it’s rare to find a drip coffee maker in Spain. Instead, we’ve found moka pot makers everywhere. You put water in the lower chamber, coffee in a basket above, and then heat it on the stove top. As the water boils, it passes though the compressed coffee grounds, and up into the upper chamber. These stove top espresso machines make a great cup of Joe.

Where’s the fridge? You’d be forgiven for thinking that kitchens in Spain don’t have fridges. Not only do the fridge doors match the cupboards, the fridges are usually tucked away in the bottom cupboards. The fridge in our last house in Canada was a stainless steel, three-door, six foot, side by side 25 cubic foot monstrosity. It was always packed full. The fridges in our rental houses in Spain are barely bigger than a bar fridge in Canada. 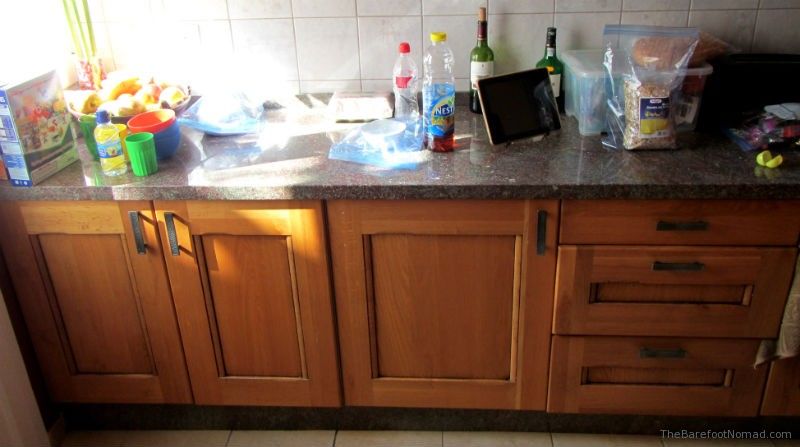 Up for a game of find the fridge? And yes, my kitchen’s sometimes messy. What’s that saying? “An immaculate house is a sure sign of a wasted life”?

People shop almost every day. Probably because their fridges are so tiny. Honestly, I think this is probably better, as you get exercise walking to the store, and your fruit and veggies are fresher.

Why is there a washing machine in the kitchen? And where’s the dryer? This is probably due to space constraints, as we’ve found apartments to be much smaller than in Canada. What did surprise me was that we haven’t even been able to find a dryer in Spain. Every place we’ve rented comes with a drying rack and clothes pins, and usually a place to hang clothes outside. Which brings me to:

Is that a grandma’s underwear waving around on the balcony? Because there are so few dryers, and many apartments are so small, you’ll see people hanging all manner of things to dry on their balcony. This is how I know that most men in Spain wear briefs, and fewer wear boxers. 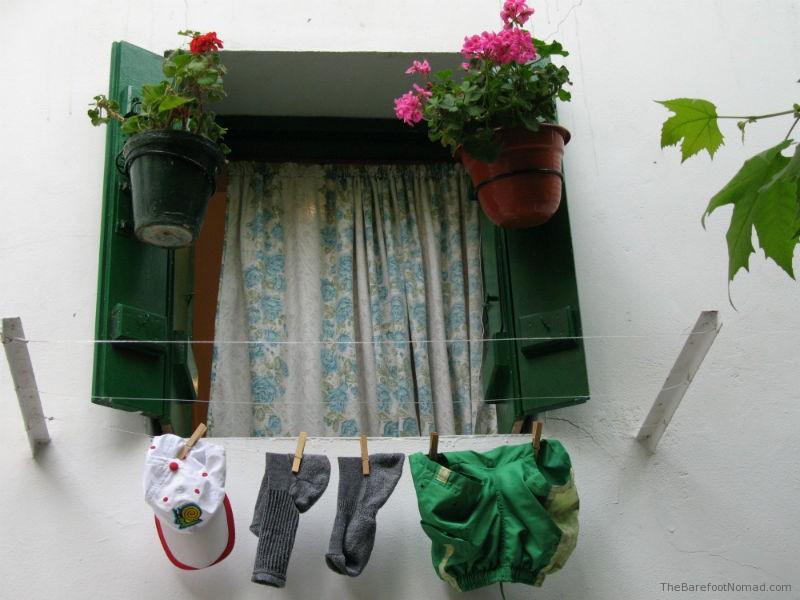 Leisurely meals. Not only do meals start late, but you’re allowed to linger as long as you like. In North America, it’s very common to get the check before you ask and sometimes well before you’re done eating. You’re also expected to finish up and leave in a timely manner once your meal has been consumed. In Spain, even in the busiest of restaurants, we’ve always had to ask for the check and it’s common for people to linger hours after their meal is finished.

Little kids stay up late, too. As we were finishing up a very late meal after checking out a night festival in Nerja, a table of about ten little Spanish kids (with four frazzled looking adults in tow) sat down beside us. It was well past 10 pm at one of our favorite restaurants in Nerja and more families were waiting in line as we left. In Spain, the typical family sits down to eat supper anywhere from 8 to 11 each night.

You really don’t need a car. In Madrid, we walked almost everywhere, and took the metro for longer trips. Even small towns can be managed quite well without a car. We’re staying on the outskirts of Nerja, a town of about 20,000 people in Southern Spain, close to Almuñécar and Malaga, and are managing quite well without our own transportation. Even in this small town, there’s a local bus that circles the town every hour, and buses that connect Nerja with almost anywhere in Spain. There’s a small supermarket seemingly every half dozen blocks, and a taxi home runs about 6 Euro. 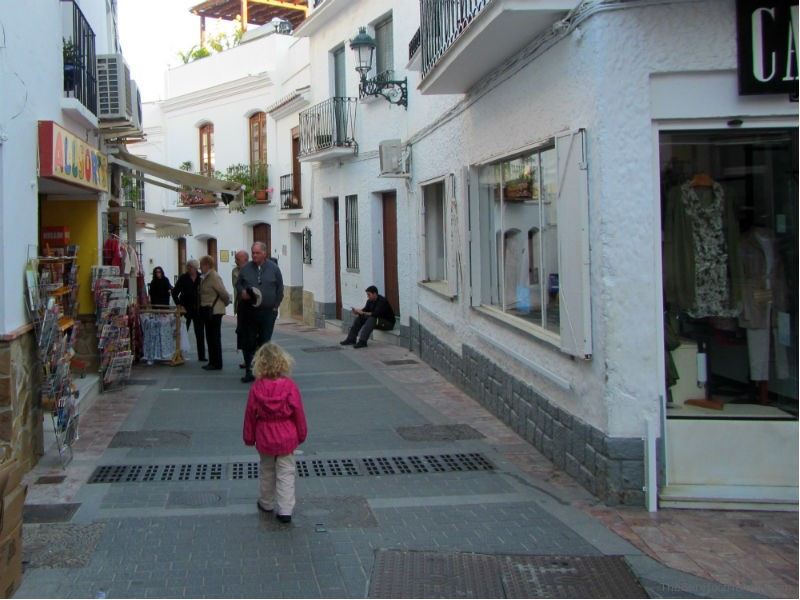 Jordan walking through the white village of Nerja

Fresh produce. The sunny climate in the South means that Spain can grow fresh veggies year round. When we arrived in February, we found ripe, delicious strawberries from Andalucia in every grocery store in Madrid. These sweet, naturally ripened beauties were a world away from the rock-hard, half green hydroponically grown monstrosities that we get in Canada in the winter. Tomatoes here taste like tomatoes off the vine, ripened slowly in the sun.

Cheap alcohol. A typical bottle of wine in Canada runs between $10 $15 to dollars a bottle with a few of the cheaper varieties going as low as $7 or $8 on sale. In Spain you can pick up a variety of brands for a Euro or two. A can of decent beer can be had here for 30 cents. Don’t even ask what beer goes for in Canada. Even in restaurants alcohol is often only a dollar or $2 a glass and is often cheaper than juice and about on par with soft drinks. Since we’re not driving most of the time, we’ve definitely been drinking alcohol more often than we did back in Canada.

Free appetizers with alcohol. Spain loves its tapas. Around here it’s very popular to go on a tapas crawl. Most bars, pubs and restaurants include a free appetizer when you order a glass of wine or a beer. With cheap alcohol in abundance, a lot of people wander from place to place ordering a drink here and a drink there while tasting tons of local gastronomical delights called tapas. From fresh bread and cheese to plates of olives, fish or meat some places feature a dozen different tapas every day. Depending on the place you can choose your own or they can choose it for you. If you stumble onto a place with something so amazing that you want more of it you can usually order a full or half ration (called a racion in Spanish) and gobble away.

Long life milk and whipping cream. We found milk and even whipped cream in Spain alongside the fruit juice on supermarket shelves. It’s pasteurized and treated so it stays good for months at a time and doesn’t need to refrigerated until it’s opened. You can still buy fresh milk in the dairy section at many supermarkets, but we’ve found the long life milk to be pretty convenient. Plus, many of the brands taste virtually the same as fresh milk.

Now, all this love of Spain doesn’t mean there aren’t a few things that still puzzle us, or drive us a bit crazy.

Where’s the oatmeal? You can buy ready-made granola (made mostly of oats) anywhere, but we had to hit up a specialty import store to find oatmeal for breakfast. The same goes for a lot of foods that we take for granted back home such as syrup, vanilla or anything Mexican.

Dog poop. What’s up with all of the dog business on the sidewalks? We’ve got our little ones trained to dodge the sidewalk surprises now, but, trust me, that was a hard-learned lesson.

The hunt for contact lens solution. In Canada, we can buy solution for our lenses anywhere from gas stations to supermarkets to convenience stores. Not so in Spain. After not being able to find solution in either grocery stores or pharmacies, we tracked some down (at a fairly hefty price) in an optical store. The very patient Spaniard at the optical counter managed to make me understand, in a combination of English and Spanish, that it was law in Spain that lens solution could only be sold at certain places.

Specialty stores. Like the comment above, many things that you could buy in one big place back in North America you have to hit 4 or 5 stores in Spain. Specialty shops are the norm here and running out to pick up a few varied things can sometimes be a half days adventure trying to figure out where to go to get everything on your list. We love supporting small mom and pop operations however sometimes it’s nice to be able to get it all under one roof.

Siesta Time. Generally, we’re all for taking a nap in the afternoon. Especially when the days are warm and the evenings are long. The problem here is that most stores and even a lot of restaurants close down for a few hours between 2 and 5:30 PM each day. We’re not crack of dawn type travelers and even then we generally work and do schoolwork most mornings. More often than not afternoons are our time to get out, see the sites and run errands. The fact that we don’t have a car and can’t stockpile food like we used to means that we always pick up food on our way home. Having to kill an hour with the kids every other day because the store is still closed for siesta gets annoying after the tenth or twentieth time.

Have you been to Spain? Did you find anything that you loved (or that drove you crazy)?

Did you find that even in Spain’s larger cities like Madrid and Barcelona, there’s a respect for leisure and fun?

We’d love to hear about it!