Mayan Ruins and Flamingos: Merida to Dzibilchaltun and Laguna Rosada

After enjoying the Christmas holidays in Merida, and wandering it’s lovely colonial centro, we were excited to explore the countryside around the big city. We were curious to see what this side of Mexico’s Yucatan had to offer. The open road was calling and we piled into our rental car for a day long road trip to see the Mayan ruins of Dzibilchaltun, the port city of Progreso and a few sites along the coast.

Our kids’ little voices warbled along in an impromptu chorus of Toby Keith’s infuriatingly catchy song, Red Solo Cups, a song much more in tune with parties and drinking games than our PG-13 itinerary of Mayan ruins and a coastal drive on the highway near Progreso.

While the song may have driven us crazy, the first rule of the road trip is: If the kids are happy and healthy (and no one’s throwing up) keep going.

Dzibilchaltun (roughly pronounced as zeeb-ill-chal-tune) is one of the many smaller ruins in the Yucatan, and is easily overshadowed by the Indiana Jones-esque ruins of Coba nestled in its jungle like setting, the tall temples of the famed Chitzen Iza, and even the smaller ruins of Tulum with its dazzling Caribbean sea backdrops. That doesn’t mean it’s not worth checking out. 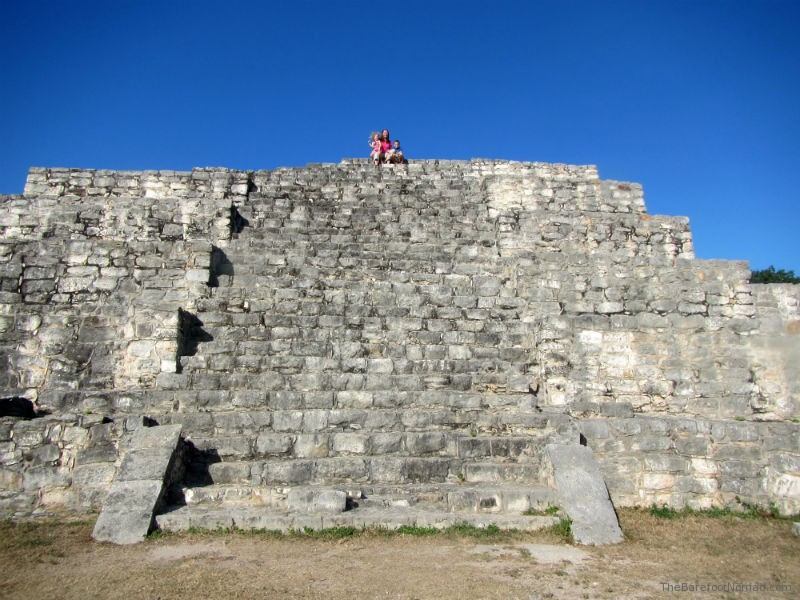 Though it’s likely not a place you’d travel days to visit, Dzibilchaltun does make an interesting day trip from either Merida or Progreso, and the lovely onsite Cenote Xlakah makes it a pleasant break from the unforgiving heat and sun this area is known for.

Currently, there are only six major structures excavated on the site, with the most impressive being the Temple of the Seven Dolls. You won’t find the temple’s namesakes, the seven clay figures discovered in the temple in the 50’s, inside the famous temple itself. Instead, they’re held in the Museo Pueblo Maya that is at the entrance to the park. Unfortunately it was closed (as it is every Monday) when we visited so we didn’t get a chance to see them up close. 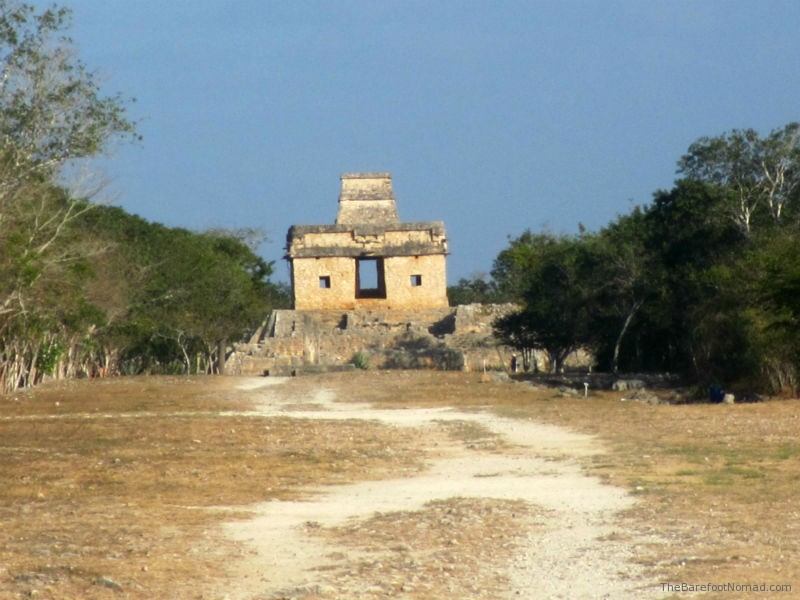 Temple of the Dolls in Dzibilchaltun

Twice a year, on the spring and fall equinoxes, the rising sun’s rays shine into the temple’s East window and out of the West window, similar to Chichen Itza’s growing serpent. What makes it really interesting is the astronomically oriented building is the only known Mayan temple with windows.

Another interesting tidbit about this area, hidden further away are believed to be over 8,000 buildings still waiting to be excavated within a 10 square miles radius of the main ruins. Who knows what kind of interesting things they’ll discover in the years to come! Seeing that Dzibilchaltun is considered to be one of the oldest continuously inhabited Mayan ceremonial sites in all the Yucatan, dating back thousands of years, there are bound to be some great finds in store. 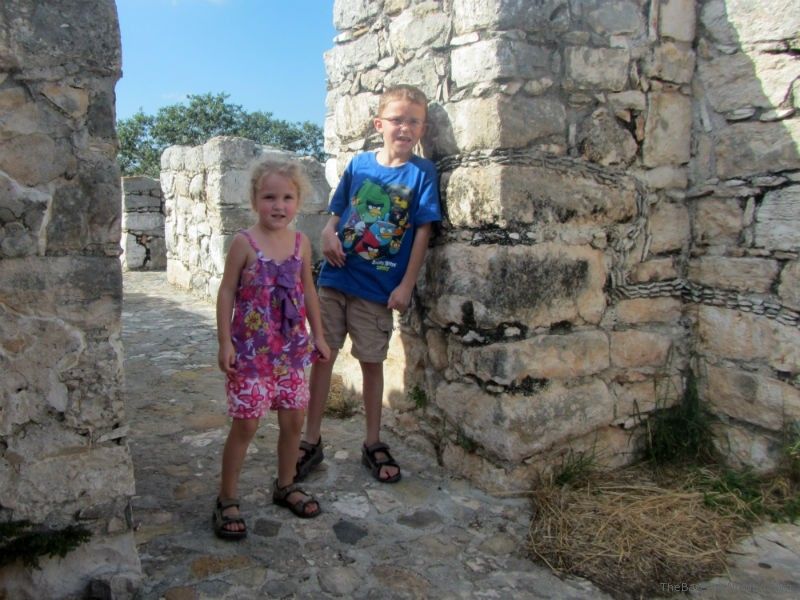 Signs at the ruins are scant, and we wished we’d either hired a guide, or had a handbook handy to explain the significance of many of the structures. With only a basic guide on our cellphone we only got a brief overview of all the buildings and were left with a few questions that went unanswered.

Tip: Frommer’s Cancun and the Yucatan

and the Lonely Planet’s Cancun, Cozumel & the Yucatan

each have a couple of pages describing Dzibilchaltun. Moon Travel Guides has a serviceable map of the ruins here.

One of the interesting aspects of Dzibilchaltun is the Catholic Church that was built on the site using the existing rocks from some of the dismantled ruins. The church dates back to the days of conquest and the strife that the church had with the Mayan religion. Ironically, the church is now considered one of the oldest churches in the Americas. 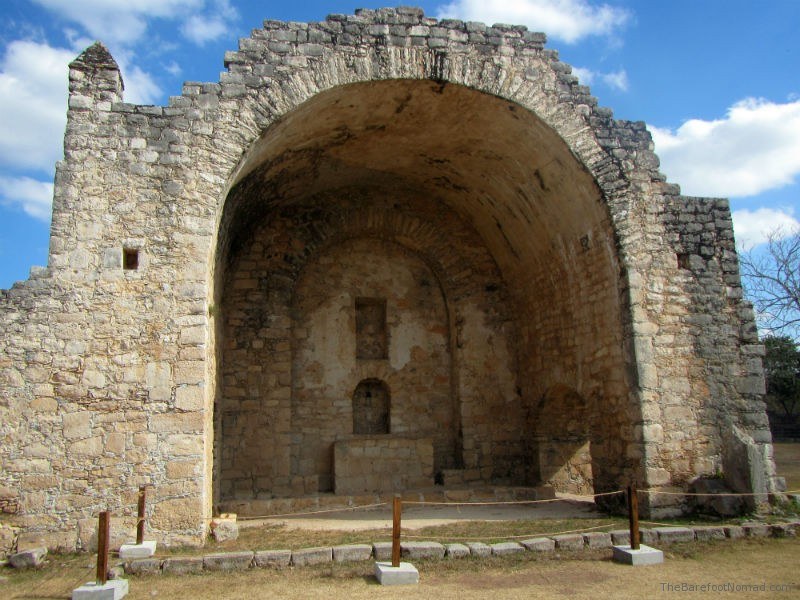 It’s a long walk from both the entrance and the smaller structures to the Temple of the Seven Dolls down an ancient white road (now more dirt and gravel than stone) in the baking sun. 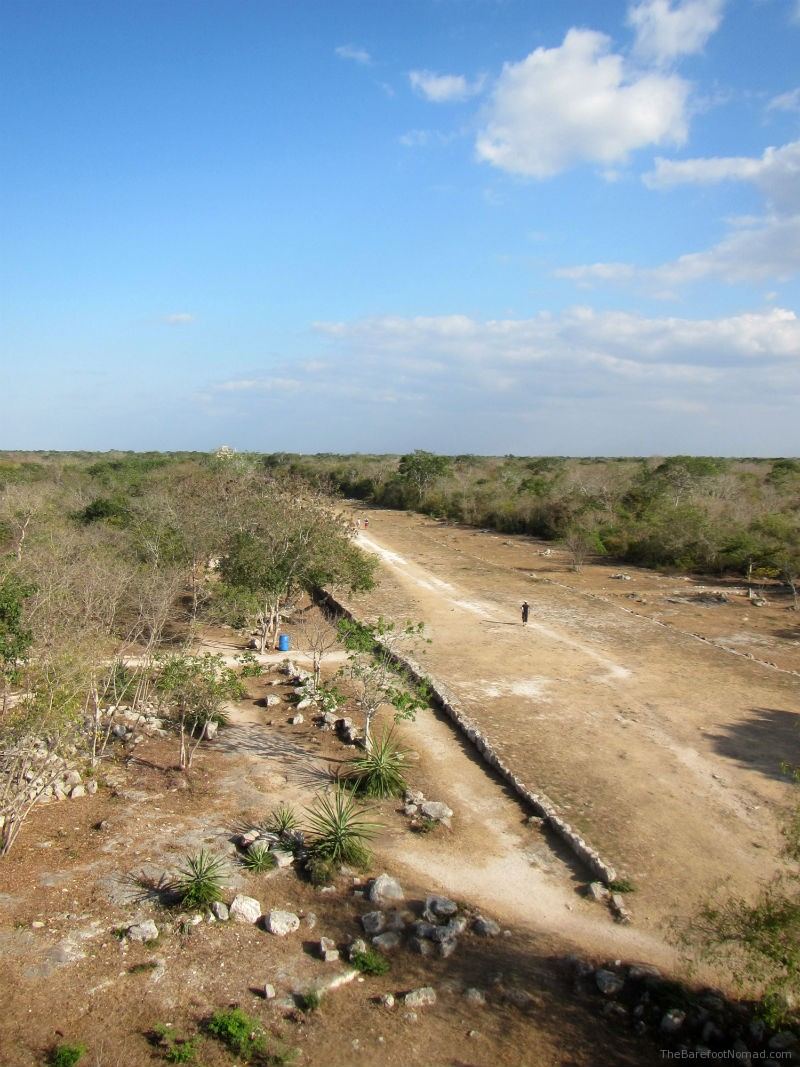 The long dusty walk to temple of the dolls

The kids were a little overbaked by the time it came to do the long walk and the road seemed to go on for ages.

Tip: You can grab drinks at the entrance to the ruins. Stock up, as there aren’t any concession stands near the ruins themselves.

The area around Dzibilchaltun is a National Ecological Park, with unique plants and animals, ranging from birds and butterflies to puma and brocket deer. The paths that snake through the trees are a little wet so if you’re spending any time bird or animal watching I strongly advise you to wear bug spray as the mosquitoes can get bad out of the sun. Don’t worry if you’re only checking out the ruins since the bugs can’t stand the heat in the open areas. 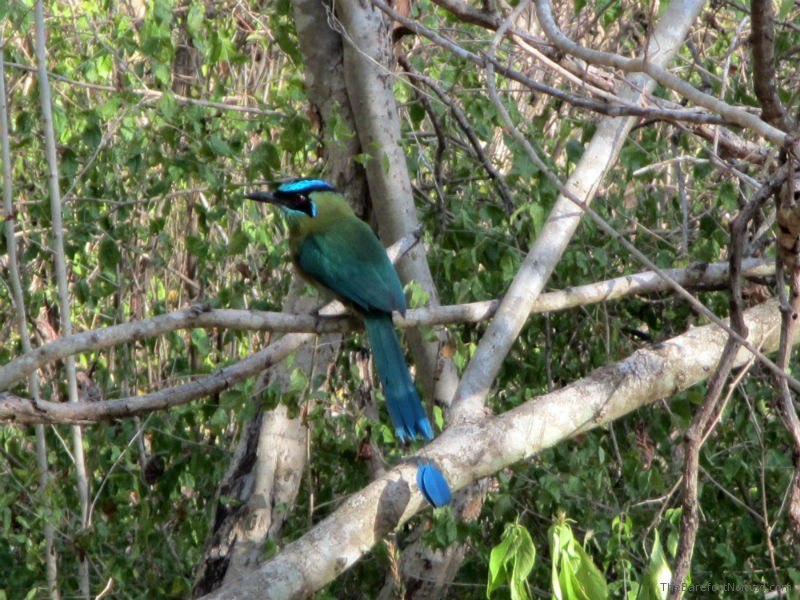 Can any birders out there identify this guy?

After a long, hot walk around the temples, Dzibilchaltun’s Cenote Xlakan called our name.

Xlakan cenote is clear, clean and shimmers like cool green glass, with one side shaded by green lily pads. Little fish nibbled at our feet when we paused for a rest, as we picked our way along a bottom covered with smooth and sometimes slippery rocks. 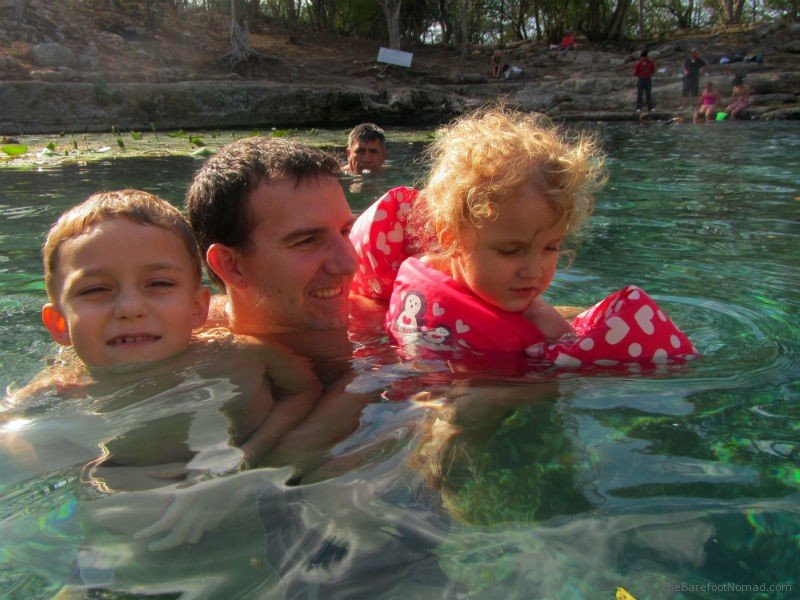 Taking refuge from the nibbling fish

The cenote is shallow at one end, and perfect for kids to play in. Bring water shoes if you have some for the shallow end as the bottom is fairly rocky.

The other end (the deep end), drops off to 140 feet and it’a great area to dive and jump in from. It supposedly merges into a tunnel deep underwater, connecting to the miles of underground rivers nearby that the Mayans worshiped as the entrance to the underworld. In any case, regardless of the number of visitors the cenote has seen over the centuries, the pool is full of clear, fresh water and is a great way to cool off in the afternoon heat. 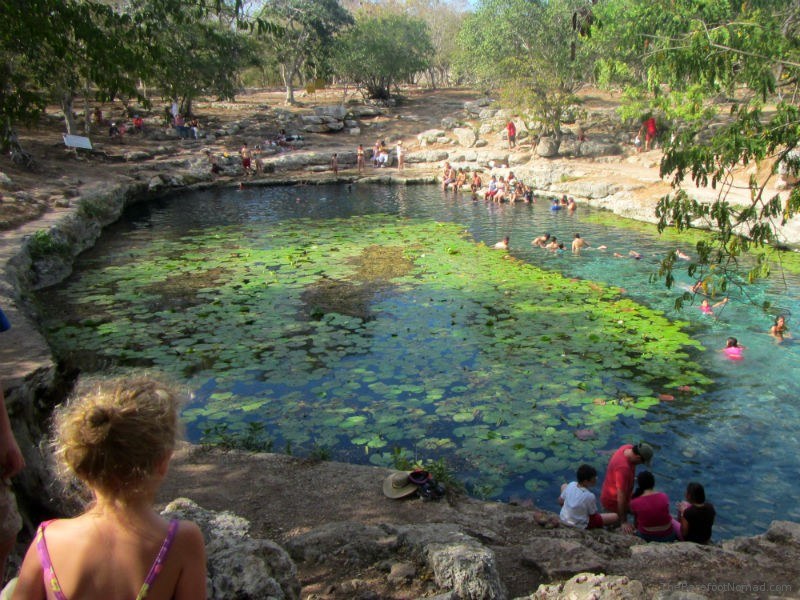 Contemplating a plunge in the cenote

After our tour of the ruins, we jumped back in the car, our clothes sticking to us in the heat and the air conditioning barely keeping up with the sun overhead. Whenever we tried to open the windows, the air coming in felt like a blast furnace. We knew it was time to hit the beach.

After driving through the main area of town, we stopped to see what the beach had to offer. Strong winds whipped Progreso’s water into a murky greenish grey as we stood there so we opted to stay out of the water that day.

Progreso itself is a low key, but busy, beach town, with small restaurants and convenience stores dotting every available inch. With the holidays still underway there was a definite festive vibe in the air the day we were there. 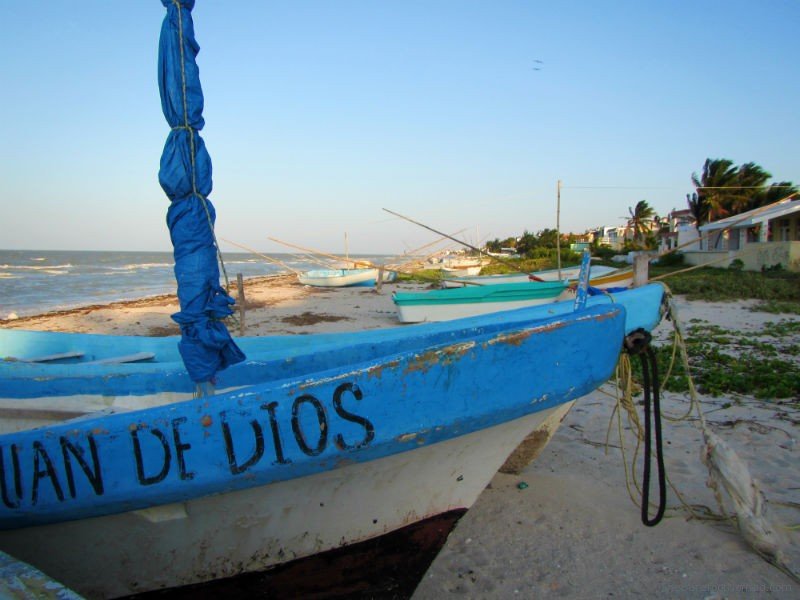 We stopped to gawk at Progreso’s pier, which juts out a ridiculous four miles into the murky sea. With the pier designed to cater to the numerous gigantic cruise ships that stop in town, it needed to be long enough to allow the cruise ship passengers access to shore. Rather than a normal pier it looks more like a peninsula with a large bridge connecting it to land. Luckily, there is a lovely boardwalk that runs along the water and makes a great stroll.

Heading East from Progreso, Highway 27 was almost deserted as we drove past mile after mile of seaside mansions. There was no visible public access to the beach, which is supposedly calmer than in Progreso, and was a lovely shade of emerald. Unfortunately, short of walking a couple of miles from the highway through one of the gated mansions, we couldn’t see any way in. With two little kids in tow, we left trespassing for another day.

South of Highway 27, about 10 kms before the little town of Telchac, on the little paved road to Dzemul, we spotted square pink pools marking the Laguna Rosada. Thousands of years ago, ancient Mayans visited the lagoons to collect salt. Today, the pink salt flats are still in use and are interesting to check out not only for their history but their amazing colors. 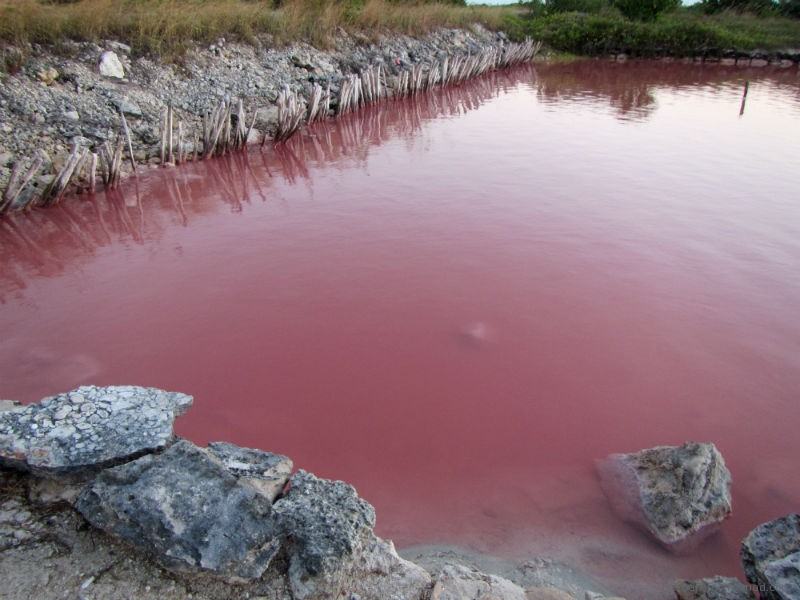 We continued our drive along Laguna Rosada, on the paved access road about 30 miles from Progreso, hoping to see flamingos. The light faded as we drove, but we found a flock of a few dozen flamingos in the dusk along the lagoon. As we pulled over, a few flamingos cruised overhead and we watched the sun set over the Laguna. 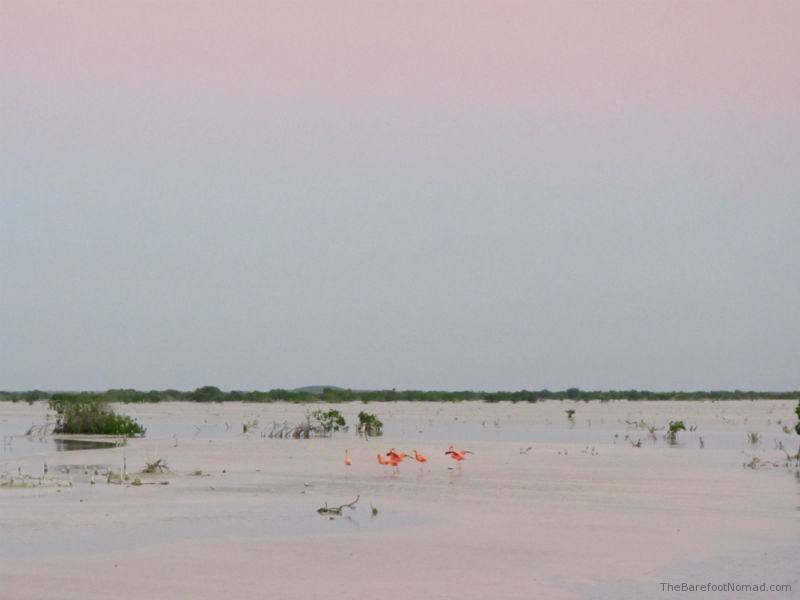 All in all, a lovely road trip and a good introduction to things to see on this side of the Yucatan Peninsula. 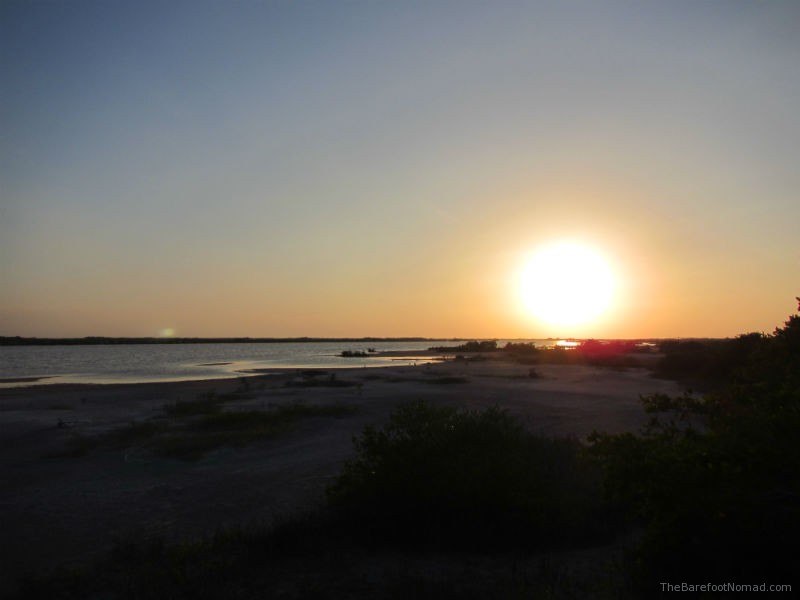 Sunset over the lagoon

Want to know more about Dzibilchaltun?

Entrance to Dzibilchaltun is about $10 USD ($118 pesos) for non-Mexican residents. Entry includes access to the museum. There’s a small charge for parking of about $1.20 USD (15 pesos).

Sunscreen, a hat, a bottle of water, swimsuit and towel (for a dip in the freshwater cenote), comfortable walking shoes, a camera and a guidebook (if you don’t hire a guide).

The Dzibilchaltun Museo del Pueblo Maya is open from 8 am to 4 pm from Tuesday to Sunday (closed Mondays). The ruins are open daily from 8 am to 5 pm, however guards may stop you from walking to the Temple of Seven Dolls if it’s too late in the day.

Tip: Dibilchaltun is a popular destination for cruise ship passengers departing in nearby Progreso. Cruise ship passengers arrive on Mondays and Wednesdays. If you’re not arriving on a cruise ship, avoid those days, as the ruins can be quite busy. The cenote is also a favorite location with the locals on hot days so bear that in mind.

Dzibilchaltun is about 20 km from Merida and 25 km from Progreso, Mexico.

How to get there

Dzibilchaltun is an easy day trip from both Merida and Progreso.

The highway from either city is well maintained, smooth and a relatively easy drive by rental car.

You can catch a bus traveling between Merida and Progreso and ask the driver to drop you off at the turnoff. Be warned, however, that it can be a long, hot walk from the highway to the ruins.