Tech We Love To Travel With

In this day and age, anyone that travels seems to be defined by what they bring (or don’t bring) on their travels. As a result, this digital age has brought another term to the backpack scene: flashpacker. Flashpacking is simply backpacking with more technological toys. It also usually refers to travellers with a few extra dollars to spend while on the road.

The term affluent is sometimes associated with it as well, but now almost everyone has a few tech toys with them. As such, I suppose you can call us flashpackers but, in truth, I like to refer to us simply as travellers or even nomads since we tend to follow the seasons. Our little ones tell everyone we’re Barefoot Nomads and to be honest, it puts a smile on my face every time they say it.

When we first started seriously travelling back in ’02 one of the first places we stopped was Singapore. At the time Singapore was said to be miles ahead of the West in terms in technology. It usually took a few months for products to show up in Canada and the US that were already collecting dust on the shelves in this Asian country. As such, we had decided to pick up both a digital camera and a new laptop while we were there. Though we were far from pioneers at the time, a traveller with a decent laptop was still a rare sight.

These days, finding a serious traveller without a laptop is a rarity and digital cameras are cheap and plentiful. Some of the equipment the typical backpacker takes and uses could probably fund a small expedition however it’s funny how vital our tech seems to us.

When we travel, we now have an arsenal of tech toys that we have trouble living without. Of course, we also tend to long stay so packing up and lugging this stuff about on a daily basis could help redefine our must have list. We’re also a family of four so a few things on this list are more for the kids than for us and if they help kill a lackluster rainy day while on the road, they’re a welcome addition to our backpack of tech. 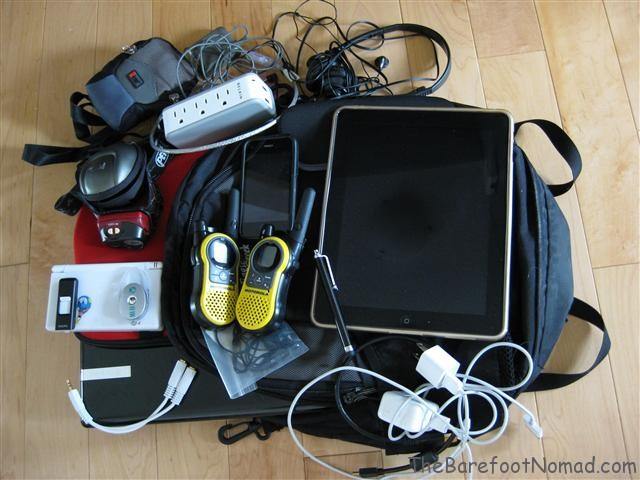 Of course, our largest accessory is a laptop. The one we’ve been using while travelling these past few years is probably going to be retired this fall and replaced with something larger and more powerful. This one is ultralight and has a 12″ screen. For its size, weight and age it served us well. We’re still debating whether we should go 14″ or 15″ on the next one. Weight is definitely a concern however staring at a tiny screen for months on end isn’t all it’s cracked up to be. At home we have some gorgeous 23″ IPS displays that we stare at day in and day out and frankly, that 12″ is a little hard to take some days.

The second biggest item is our iPad. When we first bought it I seriously doubted its usefulness. I thought it would be just another gizmo that cost too much and collected dust. Far from it, between us it’s in almost constant use and having to share it has actually caused stress on more than one occasion. Whether you’re lounging on the couch, quickly checking your email on the way out the door, seeing what Mother Nature has in store for the day, Skyping your extended family or friends while watching the little ones in the tub, killing some time playing Solitaire or one of the other million apps available to you in the Appstore tablets are here to stay and great to have. I’ve actually written a few posts with it while in Costa Rica. I don’t believe tablets are anywhere good enough to fully replace a laptop yet however they’re getting better all the time. The new Windows Surface tablet could be a real game changer in that regard.

Of course, we travel with a digital camera and a few extra SD cards. We’re not the best photographers out there and that’s simply because we’d rather enjoy a place than spend time photographing it. With that in mind we usually travel with point and shoot cameras. The smaller, lighter and faster to set up and snap the more likely we’ll take a picture. With everything else we take and with 2 kids in tow neither of us have any desire to lug around a big DSLR with a few lenses. Sometimes I regret we don’t have as many nice pics as some others out there (though somehow we have managed to take thousands upon thousands of them) however we usually use that as another reason to get out and travel some more.

The next most used device we travel with is an unlocked iPhone. A few years ago we had done some serious research into world phones and settled on the iPhone as one of the best in that regards. Neither of us had ever owned a Mac product before then but I have to say, they’re definitely intuitive. We now own a small pile of SIMs from a bunch of different countries that we keep in a small bag. Most are no longer usable (we always buy prepaid SIMs and after a period of inactivity they expire) however they’ve served us well. Most countries sell prepaid SIMs for next to nothing and it’s always cheaper to use them than call long distance. Of course, Skype, Google Voice and a few others make even phones sometimes redundant.

Our son is definitely a gamer so he always travels with his Nintendo DS. Most parents are shocked with how little we let him play it though. We use it more for emergencies and as rewards for good behaviour than normal play. If we didn’t limit his use we might as well be staying at home because his nose would be constantly glued to it and he’d be missing everything we’re travelling for.

A few years ago my brother bought our son a set of decent walkie talkies. These two way radios work for miles, are easy to carry and even have built in weather stations to them. We usually keep one in both our day packs and use them whenever Micki and I go on our separate ways while shopping or giving the kids some one on one time. It’s more of a convenience thing however it has helped us locate each other on numerous locations. At home we each carry a cell so it’s not a big deal, however we usually only use one cell when we travel since we’re together nearly all the time. The kids also love playing with them and they can act as a good distraction when we need a few moments of sanity.

Ever since they’ve come out we’ve travelled with a pair of USB sticks. We’ve found them great as an extra place to store pictures or when heading out to an Internet Cafe. There have been times when one of us needed some time away from the kids and walking to the nearby cafe for some uninterrupted computer time has been great. They also come in handy when you can’t get internet access, but have pre-written an email or two to send back home. We used to love writing up emails while sitting on our porch staring out at some beautiful ocean beach or majestic mountain and then run to the nearby internet place and quickly send them all off. It also saved on the amount of internet fees we used to have to pay.

Some of the other accessories we always keep with us include cables such as an HDMI cable (so we can hook the laptop to a TV to watch movies with) , an Ethernet cable (in case internet is wired we can then set up an ad-hoc network so we can share WiFi with the iPad and iPhone), a headphone to RCA Y splitter cable (so we can push sound to the TV or to a stereo receiver), a Belkin 3-Outlet Mini Travel Swivel Charger Surge Protector with Dual USB Ports (in case we need a few extra outlets and it also has 2 USB charge ports built-in), 2 iPad/iphone cables and chargers (so we can charge the iPad/iPhone/2 way radios/NDS), a headphone splitter and headphones for all of us (the kids can then share watching a movie on the iPad or notebook in blessed silence).

We also bring along a few spare batteries for emergencies and a Petzl Tikka headlamp. The headlamp has gotten good use in the past and packs up small and light in the carry case. The batteries in it last forever. We also take along a few small disposable flashlights for the kids.

In terms of tech toys that may seem like a lot but to be honest it all fits comfortably in a daypack. We usually split the pile in half for weight and security reasons while we travel and also so we can have quicker access to something if we need it.

If there’s anything you think we’re missing or if you want to know exactly what or why we travel with something send me a comment. I’d love to know what you all consider “essential tech”.