Travel Paralysis: Problem Deciding On Your Next Adventure?

Over the past few years, we’ve noticed a reticence in our travel planning. There’s been an ever growing list of places we’ve put off traveling to, even if the places are near the top of our bucket list. We’ve finally isolated it and are now trying to make sense of it all. If you travel a lot, it’s even possible that you yourself have it and you don’t even realize it. In two months, we’re flying from Mexico to Madrid, Spain. Seeing that neither of us have been to Southern Europe we thought it was finally time to make it happen. Considering that we’ve been to a ton of places around the world, you’re probably asking yourself why it’s taken us so long to visit such a rich and colorful area.

That question is both simple and complex. I could blame it on cost, but in reality it has to do wonder. You see, whenever we start to look into places like Spain, Portugal, Italy, Greece or Turkey, there are so many things we want to see and do that we’ve felt that a few months (or even a few years) wouldn’t suffice.

With a thousand random facts and bits of trivia already lodged in our brains, every new picture or story about any of these countries just lead to further indecision. Where would we go, where would we stay, how could we afford to see everything we heard and dreamed about?

Worse, how could we travel to this area and not see everything? The planning and logistics alone boggled our minds. The result of it all was putting off this trip for as long as possible. Truthfully we never gave much thought about it until recently.

We had come to a roadblock that I call travel paralysis.

Have you ever been hit with travel paralysis? Is there an area you’ve heard so much about that you didn’t want to go for fear that it wouldn’t live up to the hype? Were there just so many things to see and do there that you constantly pushed off going until you felt you could see it all in one giant trip?

Then there are also size and time constraints. Constraints like large countries with two very different areas and the distance between them too great or the cost of flying too high to afford. Australia is a perfect example. With Perth, Darwin and Uluru being practically a world away from the rest of the big cities and Adelaide, Melbourne, Brisbane and Sydney hundreds of miles away from each other how do you settle on only seeing a few of them at once?

Canada is another great example. I can remember a few years ago a friend of ours was expecting family from Europe. Before getting here they made of list of things they wanted to see and do in Canada. The list only contained four places they’ve always dreamed of seeing, however their family obviously never bothered to look closely at a map. The list contained Montreal, Niagara Falls, the Rockies and Vancouver. The kicker? They were only in Canada for a week. 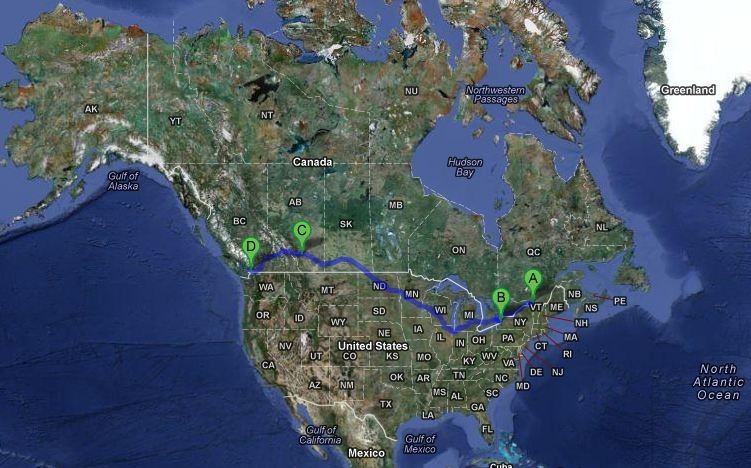 Montreal is over 5,000 kilometers (3,000 miles) from Vancouver and they would have spent the better part of the week sitting in a car without much time for sightseeing. They ended up flying into Montreal, renting a car to drive down to Niagara Falls, then jumping on a plane from Toronto to Calgary. In Calgary they jumped on a train that took them through the Rockies all the way to Vancouver. They had a great time, spent a small fortune, quickly learned how big Canada is and swore that next time they visited they would just concentrate on one area.

This brings me to one of my own embarrassing facts: I’ve never been to the east coast of Canada. To be honest, I’ve never been east of Toronto and I’ve only seen a very small portion of that city to begin with. I have many friends that have only left the country a handful of times however they’ve all spent much more time on the east coast than I have. Niagara Falls? Nope, never seen it. Catching a show or eating poutine in Montreal? Negative. Fresh lobster in Newfoundland? Never. Seeing the the green fields and cliffs of Prince Edward Island? Never happened. The closest I ever came was watching Anne of Green Gables on television as a kid. It’s not like I don’t want to see it all – it’s that I know so much about it that a few weeks wouldn’t suffice to take it all in.

In truth, that’s been one of our greatest dilemmas since beginning this Barefoot Nomad thing. With a whole world out there waiting to be seen and explored, where do we go first and what should we do? For most of you in a regular nine to five job and wishing for an opportunity to see the world, this might seem like a trivial thing, however it’s a reality for anyone who makes this their life.

If you have any trouble deciding on where to have supper or which movie to watch next, imagine having to decide which country or even city to do it in. Now factor in the fact that we’re not independently wealthy, that we still need a place in which we can do work for 4 to 10 hours a day, is safe enough for kids, getting there doesn’t cost an arm and a leg, it’s not too remote that internet access is unheard of and preferably warm while we’re there. Not as easy as it sounds right?

Like most people, we have a bucket list of places we want to go. We’ve changed the order on a lot of those since we’ve had kids simply because the timing isn’t right or that we truly want them to remember their time there. This also brings us back to Southern Europe. Jordan is finally reaching the age that she might actually remember some of this trip as she gets older. On top of that, we’ve also realized that even four months won’t allow us the time to see and do everything we want in those countries.

We’re not just about checking off places on a map to say we’ve been there. Our focus has always been about seeing each place for what it is. As a local and a tourist both.

We still need to understand that sometimes this takes more time than we allow ourselves and most places can take a lifetime to see all there is to see.

Travel paralysis is more than just a decision phobia, it’s knowing there’s a great big world out there to see and explore and that we need to be judicious with our time and energy. We’re only granted a finite amount of time on this earth and the reality that we’ll experience it all is an illusion at best and detrimental to our mental health at the worst.

Travel paralysis can be as small as having trouble deciding where to eat out, or as large as deciding where to go next. It’s the problem of having too many perceived choices with the desire to try them all at least once. In some ways it’s the greatest problem to have. For any of you facing this quandary, realize that seeing and exploring everything isn’t possible and limit yourself to what you feel is the most important to you. If you feel someplace is calling your name, go. On the other hand, if we hadn’t opened ourselves to possibilities we’d never have listened to those five wild Danes we met in Malaysia and visited Indonesia on their urging, so realize it’s not always about the destination, but the journey as well. Open yourselves up to possibilities and remember that the first rule of travel is to leave your negativity behind.

Make a decision, go with it, enjoy yourself while you’re there and don’t focus on what you might have missed. Be thankful for everything you had the pleasure of experiencing and know that there is still more in this world for you to explore and enjoy on your next adventure. Don’t let travel paralysis hold you back from making decisions. Just rejoice that you have those options in the first place!