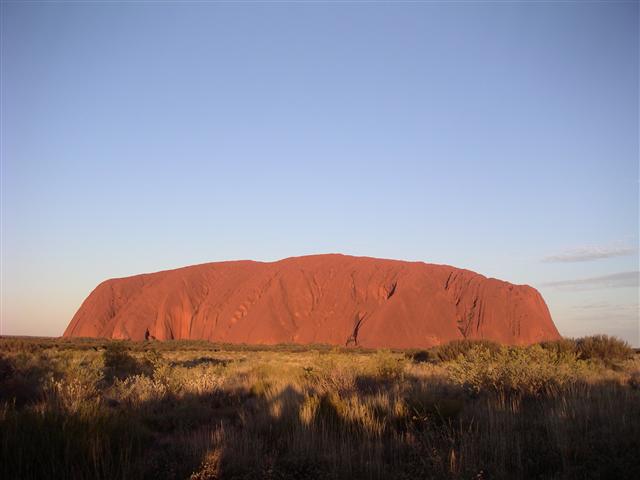 Ayers Rock, or Uluru to the local Anangu Aboriginal people, is a large sandstone rock formation in the southern part of the Northern Territory in central Australia. It’s about 3 and a half hours south west of the nearest large town, Alice Springs.

The area around the rock outcropping includes a few water springs, waterholes and rock caves with some ancient paintings. There are numerous guided tours and seeing the rock is a great way to learn about its Aboriginal history.

Truth be told, it may seem like a long way to travel just to see a giant rock, but the entire experience can be quite memorable.

Whether you’re enjoying the sunrise or sunset views (the only time the rock truly looks red) with the traditional glass of champagne or hiking around the 9.4 km trail at it’s base, Uluru needs to be seen from different angles throughout the day to be fully appreciated.

The color and texture change so much depending on the time of day you would almost believe it was alive. The nearby domed rocks of Kata Tjuta (the Olgas) is equally captivating, has a few walks of it’s own and will leave you with a feeling of wonder.

The drive there can get a little boring, however, the occasional kangaroo and emu sightings, the red dirt and scrub bush, the camel ranches and the beautiful Australian outback sky are all interesting things to see along the way. They have a nice resort/campground in nearby Yulara (Ayers Rock Resort) where you can stay for a few days. If you go you’ll definitely want to see at least one sunrise or sunset viewing and I would recommend against any extended driving in the dark when you’re new to the outback.

Here’s a travel tip: If you’re driving in the outback by wary of kangaroos. For whatever reason when they’re on the move they rarely stray from their path.

When we drove up the Oodnadatta Track and the Stuart Highway in our van from Adelaide to Darwin and then across from Darwin to Cairns we saw countless kangaroos and even more carcasses along the highway. More than once we had to stop the car to let a kangaroo jump across.

The funny part is that in a lot of places you can see the kangaroo coming from a mile away. They’re usually bouncing perpendicular to the road and traveling at a decent speed. Even though you’re 10 times they’re size and are quite visible they don’t seem to notice that you’re there. They’ll run right into the side of your vehicle if you’re at the wrong spot at the wrong time, even if you’re at a complete standstill!

Next to the zigzagging road trains, the kangaroos are the biggest threat on the roads in the outback and aren’t so easily dismissed.